Literature / The True Story of the Three Little Pigs 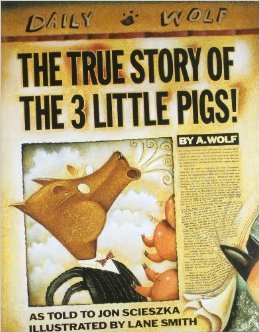 Here’s what really happened with the Three Little Pigs!
Advertisement:

The True Story of the Three Little Pigs is a children's book written by Jon Scieszka, with illustrations by Lane Smith, released in 1989. It's a parody of The Three Little Pigs with the story being told from the perspective of "A. Wolf" or "Alexander T. Wolf", as the wolf is known in this story.

In this story, the Big Bad Wolf tells the audience what really happened between him and the three little pigs and how he became the "Big Bad Wolf". See, he was baking a cake for his grandmother's birthday, but he ran out of sugar and decided to go ask his three little pig neighbors if he could borrow some. But he also happened to have a cold at the time, with a ridiculously powerful sneeze when provoked — say, by a pig who wouldn't help a harmless wolf bake a cake for his grandmother's birthday...

The story became so successful that it spawned several other Fractured Fairy Tale retellings of popular fairy tales such as The Frog Prince Continued and The Stinky Cheese Man by Jon Scieszka.