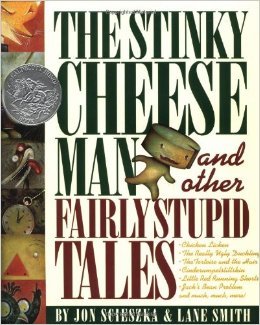 The Stinky Cheese Man and Other Fairly Stupid Tales is a book of spoof fairy tales written by Jon Scieszka and illustrated by Lane Smith, and first published in 1992.

The narrator, Jack (of "and the Beanstalk" fame) relates to the reader extremely silly takes on a number of classic fairy tales, including "The Princess and the Bowling Ball," "The Tortoise and the Hair" and more. But Jack's production is plagued with problems from the very beginning... literally. Before the book even begins, the bossy Little Red Hen shows up on the front paper and demands Jack tell her story (she's also on the back of the book, complaining about the UPC and wondering "Who is this ISBN guy?"). The table of contents goes missing, only to end up as the punch-line to one of the stories. And when Jack finally gets around to telling his story, the Giant shows up and threatens him.

Still, it's all in good fun, even if "Fairly Stupid" really is the best way to describe these tales.