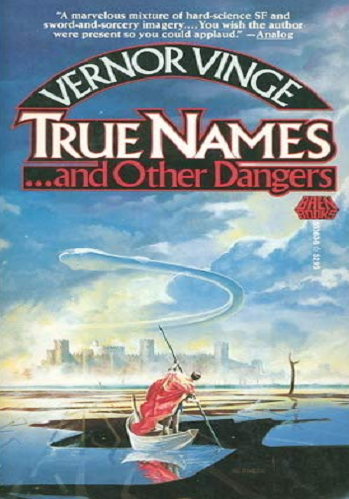 "...once an enemy, even a weak unskilled enemy, learned the sorcerer's true name, then routine and widely known spells could destroy or enslave even the most powerful."
Advertisement:

True Names is an influential 1981 Science Fiction Novella by Vernor Vinge about computer hackers who regularly meet in an open-ended on-line game called "The Other Plane". The hackers must keep their True Names—their "real world" identities—hidden, like wizards of lore, both to avoid detection by law enforcement ("the Great Enemy"), and to protect themselves from being hacked or blackmailed by others in the game.

The story starts when Mr. Slippery, a member of an elite hacker SIGnote  (Special Interest Group) called the Coven, is visited by Federal agents, who know his True Name. But they don't want to arrest him—they're after a much bigger threat, and they want his help. They need to find a hacker known only as "The Mailman". When he returns to The Other Plane to begin his investigation, he's approached by Erythrina the Red Witch, one of the senior members of The Cabal, who is also worried about The Mailman, and would like his help. Together, Mr. Slippery and Erythrina begin a very dangerous investigation.

The story presaged ideas that later became staples of the not-yet-born Cyberpunk genre, like Cyberspace and Digital Avatars. But while it was nominated for both the Hugo and Nebula awards, it remained a bit of a cult classic, and credit for many of its ideas are often mistakenly attributed to later but better-known works by William Gibson or Neal Stephenson.

It was first collected in True Names...and Other Dangers. It was later republished, along with a series of non-fiction essays about the ideas in the story, written by various authors and industry experts, in True Names and the Opening of the Cyberspace Frontier.