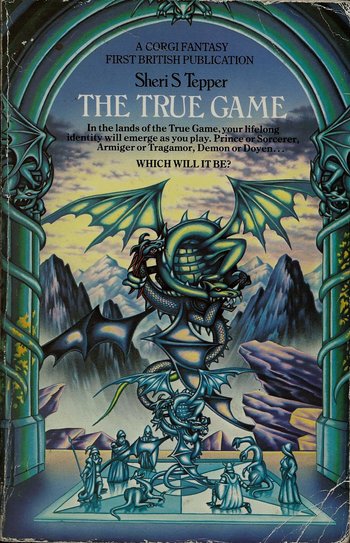 The True Game is a trilogy of trilogies by Sheri S. Tepper.
Advertisement:

The setting of the series is a world where many people have magical "Talents", and political interactions take the form of the "True Game", in which battles play out like real-life versions of a game something like chess but with as many kinds of chesspiece as there are Talents. (People with no Talents are called "pawns", and often suffer the brunt of their rulers' conflicts.)

As the series progresses, the world is a revealed as a planet in the distant future colonized by humans (implied to have been a dumping ground for the people whose psychic abilities were the foundation for the Talents, who were feared and distrusted on their homeworlds), but also home to many strange native beings.

The first trilogy — King's Blood Four, Necromancer Nine, Wizard's Eleven — follows a young man named Peter as he tries to find his place in the world, and discovers the truth about the planet's history.

The third trilogy — Jinian Footseer, Dervish Daughter Jinian Star-Eye — begins as a P.O.V. Sequel to Peter's story, before continuing on to a crisis that determines the future course of the world.