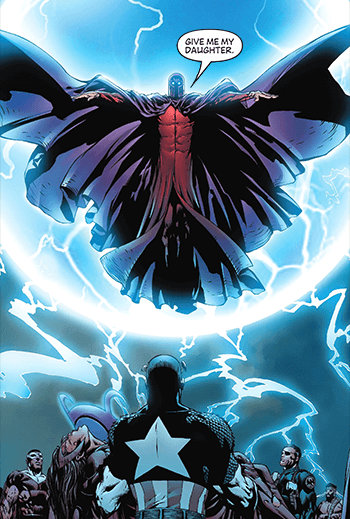 And absolute powe... oh, we used that joke already?
Chip: She can fly!?
Needy: She's only hovering. It's not that impressive.
Jennifer: Do you have to undermine everything I do?
— Jennifer's Body
Advertisement:

One of the marks of incredible power is the ability to levitate in the air without any apparent means of doing so.

Floating is a favorite pastime for many different character types among many different genres. Witches, wizards, and psychic types can levitate or fly as a spell. Supernaturals of various stripes, like vampires, ghosts, angels, etc. also enjoy floating. Vampires in particular, like to use it in a Pivotal Wake-up. Heroes and villains (especially in video games) often learn to float and levitate after going into their Super Mode as their powerup gives them the ability to defy gravity. Even inanimate objects can get in on the action, as the Mineral MacGuffin, Cosmic Keystone, or any shiny object of power will often be found be floating over a pedestal draped in light.

Other examples are people who unexpectedly float in the air after eating, drinking, or breathing something (often the advertised product) that normally would not cause a person to become lighter than air. Usually they are surprised by their sudden weightlessness, but find it enjoyable.

Generally, this is seen as badass and dangerous (on par with Unstoppable Rage) because it's far less natural than outright flight. Even though the floating itself is usually harmless, it can really freak enemies out because it implies the floater is capable of much more powerful feats. In short that he is defying physics just enough to float because it's cool, but with more hurt hidden up their sleeves just waiting to come out.

Power Gives You Wings is a Sub-Trope, where sufficiently powerful beings gain the ability to sprout wings as opposed to just floating on their own. Expect to see some Midair Bobbing. The most common stock pose associated with this is the Levitating Lotus Position, although the Standard Power-Up Pose can be seen as well. Contrast Ghostly Glide, when a form of this trope is used to unnerve. See also Chunky Updraft. And if the power of love causes it, it's Lovetation.

open/close all folders
Advertising
Anime & Manga
Comic Books
Fan Works
In Chapter 41 of The Awakening of a Magus, Harry goes to the roof in order to enjoy the feeling of a storm around him... and begins to hover in the air without even realizing it.
Films — Animation
Films — Live-Action
Literature
Live-Action TV
Music
Myths & Religion
Tabletop Games
Theatre
Toys
Web Animation
Webcomics
Web Original
Western Animation
Real Life
Feedback