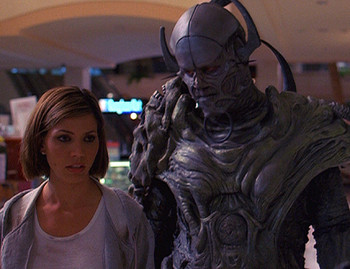 The Fang Gang holds a surprise birthday party for Cordelia, featuring a cake with an image of Wonder Woman drawn in frosting. Cordelia has a vision and crashes into the weapons cabinet. When she wakes up, she appears to be a ghost. She watches the AI team pick up her body and place it on a couch. She tries to speak to them, but they can't hear her. When Lorne comes downstairs, he not only fails to see or hear Cordelia, but walks right through her.

Angel discovers a vial of pills. Cordelia has been taking Seltrax, a powerful migraine medication, without telling her colleagues. The AI team splits up into squads Fred and Gunn go to Cordelia's apartment to search for clues to her condition, where they find that Phantom Dennis has prepared his own birthday party for Cordelia.

At the Hotel, Wesley reads up on Astral Projection. He guesses that Cordelia might be on the astral plane and unable to communicate.

At Cordelia's apartment, Fred and Gunn cannot find any medications. Fred guesses that Phantom Dennis is covering up for Cordelia. When Gunn asks Dennis for help, and explains that Cordelia might die, Dennis moves a plastic box from under Cordelia's bed. It contains medicines with prescription dates of a year before.

At the Hotel, Angel tells the sleeping Cordelia that he is angry at her for keeping secrets from him when he might've been able to help. Lorne enters, places his fingers on Cordelia's temples, and tries to sense her presence. He says Cordelia is not in her body. Angel pressures Lorne to use his connections with the Powers That Be to help Cordelia.

After Lorne leaves, Angel remains to watch Cordelia sleep. When he nods off in his chair, Cordelia's ghost enters Angel's body. Angel's body, now under the control of Cordelia's ghost, rises, picks up a marker, and begins writing an address on a lampshade. Before the number is finished, a swirling black shape appears and Cordelia is expelled from Angel's body.

Wesley enters. Angel says he dreamed that Cordelia was trying to tell him something. Wesley says he has examined Cordelia's CAT scans, and she is dying. Angel leaves, while Wesley takes his place watching Cordelia's body. Skip, the demon who once guarded Billy, appears and addresses Cordelia's ghost. Cordelia has many questions. Skip insists on leaving the hotel before answering.

In the office, Angel, Gunn and Fred examine Cordelia's CAT scans. It appears that most of her brain is dead. Lorne enters, fresh from his consultation with the Powers That Be. He is bound by a spell and unable to speak of what he learned, but he manages to write something on a slip of paper that will enable Angel to find the conduit to the Powers That Be. Angel takes the paper and leaves.

Cordelia and Skip appear in a deserted shopping mall. Skip tells her it is actually a construct of a mall, similar to the virtual reality setting of the film "The Matrix." He explains that the Powers That Be never intended for her to receive visions, which are an "ancient, powerful force" that only demons can withstand. Her introduces Cordelia to Tammy, an English girl from the 17th century who had the visions for about a year until one of them blew out the back of her skull.

Angel falls, we do not see from where, into a circular chamber with a fire pit at the center. He hears voices telling him his mission is futile and his death is certain. When he asks to see the Conduit, the voices say they are it. Angel demands that the Powers take back the visions they gave to Cordelia. The invisible beings throw him about the room.

At the mall, Skip reminds Cordelia of the night when she met Angel at a Hollywood party. Skip says that if she had not talked to Angel that night, but to a certain talent agent instead, she would have become a famous and wealthy actress. He adds that the Powers that Be could "write over history" so that she would have the life she was meant to have. If she refuses this, and returns to her body, she will be paralyzed and helpless until the next vision comes to her, and then she will die.

When Cordelia objects that Angel needs the information from her last vision, Skip leads her to the chamber where Angel is disputing with the Conduit. Angel, unable to see Cordelia or Skip, argues that Cordelia is "weak" and only a "rich girl from Sunnydale who likes to play superhero." Cordelia asks to leave.

Back at the Mall, Cordelia makes her choice and Skip sends her into her alternate life as two-time Emmy-winning star of a television show called Cordy!, created by Phlegmont and Mendoza.

After a filming, TV star Cordelia tries to remember something. After several guesses, she remembers the Hyperion Hotel and tells her personal assistant that she wants to go there.

In this reality, the Hyperion is a working hotel. The desk clerk checks Cordelia into the luxury suite, but she insists on entering a standard room nearby. Alternating with the room, Cordelia sees glimpses of the same room in the other reality. She tears the wallpaper away at a certain spot, where she sees the address "171 Oak," which comes from her vision.

Cordelia goes to that address and knocks on the door. The resident, Cynthia York, is a fan of hers who recognizes her and immediately admits her, though she is puzzled as to why a famous TV star would show up at her door.

Cynthia shows Cordelia a pentagram inside a magic circle. She is planning to perform a retrieval spell so that her father, who has left the family, will return. Suddenly a demon appears in the magic circle and attacks the two women. As Cynthia flees and Cordelia fights back, Wesley and Gunn appear at the door and kill the demon.

Cordelia and Wesley get reacquainted, and Wesley introduces her to Gunn. Wesley has only one arm, having lost one in a fight with a Kungai demon two years earlier. She tells the story of how she came to the house.

The three return to Angel's dwelling. Wesley explains that Angel now has the visions, and has become a recluse who communicates with Gunn and Wesley only to tell them what he has seen in his visions. Cordelia enters Angel's room where she finds him babbling and incoherent. She assumes that "everything will be OK" and kisses him. A spark appears between their lips. Cordelia rises and sees that Wesley and Gunn are motionless.

Cordelia addresses Skip, who is present but invisible to Wesley and Gunn. Cordelia tells Skip that having the visions is part of her mission, and demands them back. Skip tells Cordelia that the only way she can have the visions without dying is to become part demon. Despite Skip's warnings that the process is painful and dangerous, Cordelia insists on it. Skip does as she asks.

At the Hyperion Hotel, in the original reality, Cordelia wakes up. After checking for horns and a tail, and finding none, she suddenly gets a vision but now without any pain. As she calmly recites the details, her friends watch her puzzled and not because of the painless vision but because she is now levitating above the ground.