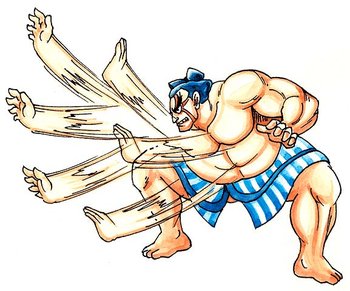 Guess why this move is called the "Hundred Hand Slap".
"Ten seconds ago I was in a different time-zone. How many times do you think I'm going to hit you in the next ten seconds?"
— Tachyon, Sentinels of the Multiverse
Advertisement:

When a character does this while armed, it is a Spam Attack. This trope is a type of Death In All Directions. In trading power per hit for a large hit count, unless you're a Lightning Bruiser with both to spare, beware Punch! Punch! Punch! Uh Oh.... If punches are reactively weak, this may result Death of a Thousand Cuts. If two fighters capable of doing this attempt to outdo one another, the result is a Pummel Duel.

This is, to a degree, actually Truth in Television, as chain punches are an actual technique used in the Chinese martial art Wing Chun. Jeet Kune Do features a similar technique called the "Straightblast" which also qualifies. Though it's really difficult to keep at it for very long. Or with any power whatsoever. So it's best used in short bursts to catch opponents off guard. (For those not in the know, Jeet Kune Do is a martial art developed by Bruce Lee. Yes, that Bruce Lee.)