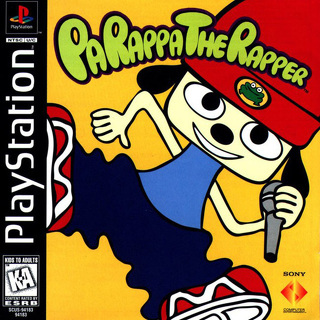 Kick, punch, it's all in the mind!
"I gotta believe!"
— PaRappa's motto
Advertisement:

Released in December 1996 in Japan, September 1997 in Europe, and November 1997 in the US, PaRappa the Rapper is a Rhythm Game for the PlayStation.

The game follows the (mis)adventures of a rapping puppy named PaRappa who attempts to improve himself in order to impress Sunny Funny, the girl he has a crush on, despite being intimidated by the presence of Joe Chin, a rich and narcissistic dog who is also trying to woo Sunny. How does he win Sunny's heart? By rapping his way to glory, of course!

The game works like this: Every stage has a "teacher" who raps a song and ask you to perform certain tasks, like learning karate, learning how to drive, selling things at a flea market, etc. in time with the music. You hit a button at the right moment as indicated on a bar at the top of the screen. Effectively, it's a video game version of Simon. Do well and you'll make it through the song; do too badly and you'd have to try again.

But, the rap twist is that during gameplay, PaRappa can deviate heavily from the "teacher", creating his own twisted yet awesome string of button mashes and random sentences, and still score points. In fact, by creating original lines that are synchronized with the rhythm and beat of the teacher's lines, the player can access freestyle-mode and get better endings.

It is a very short and simple game, but the unique premise, the appealing Paper People artstyle, and the unbelievably catchy songs made it an instant cult classic. It's not only seen as the first definitive modern Rhythm Game, but probably the most influential. Pretty much every Rhythm Game created since, from DanceDanceRevolution to Guitar Hero to beatmania, owes at least a little to PaRappa, if only for starting things off. The game is still highly regarded today, with a 88% on GameRankings

PaRappa also produced a spinoff in 1999 called Um Jammer Lammy, featuring a guitar-playing lamb named Lammy but otherwise borrowing much of the same gameplay concepts and style. PaRappa himself is an unlockable character in his own side-story. This game spawned an album called Make It Sweet!, credited to MilkCan, the in-universe band Lammy plays in. A direct sequel named PaRappa the Rapper 2 was released on the PlayStation 2 in 2001, which once more focused on PaRappa (but with cameos from the MilkCan members).

PaRappa has appeared in other media as well. There was also an Anime of the Game by the same name that lasted two seasons and introduced Canon Foreigner characters. Before the anime debuted, Rodney Greenblat, the game's illustrator, had created a series of comic books that are decidedly more true to the game than the anime. Later on another anime would air centering on PJ that would also be closer to the games.