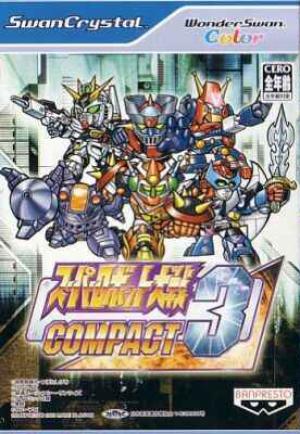 The Earth is nearing what seems to be the end of a long, painful war. Dr. Hell, the Mycenae Empire, the Hyakki Empire, Neo Zeon, and the Organization of the Zodiac have all been defeated, with the Campbellians and the Titans on the verge of destruction. However, the Earth Federation cuts back at the very last minute: the Argama is forced to finish off remnant Titans on its own, while the Super Robot teams are left to deal with the remains of their respective enemies without assistance. Because of this, half a year passes with little-to-no progress being made against completely destroying the various factions.

Little do they know that a new war's about to begin: when Jaburo is under siege by a mysterious, fight-happy race called the Shura, a stray warrior named Folka Albark with his mech Ialdabaoth ends up siding with the Londo Bell, while being systematically hunted by his fellow kinsmen.

Compact 3 is a peculiar game compared to its contemporaries within the Super Robot Wars series. It was released during the final year of the Wonderswan's life cycle; Banpresto shipped a mere 15,000 copies to stores, and most indications are that an even lower amount was actually sold. (Compare that to the 200,000-250,000 that Super Robot Wars Destiny, which released around the same timeframe, sold.) The game mechanics are a strange mix of classic design and more modern traits, so one gets pilot customization while also having to work around the "Limit" unit stat. There are no outer space missions whatsover.

The addition of The Vision of Escaflowne alongside the returning Aura Battler Dunbine and the first "true" storyline usage of New Story of Aura Battler Dunbine create a game that is known for dimension hopping and magical mecha. Other debuts include the psychological horror series that is Betterman, the obscure Makyou Densetsu Acrobunch, and the infinitely more obscure (as in, likely the most obscure 70s anime to ever grace a traditional Super Robot Wars game) Combining Squadron Mechander Robo. Everything else is pulled from a previous game in the Compact sub-series.

Series listing in Compact 3 (Debuting entries are in bold)

Tropes that Compact 3 has include: