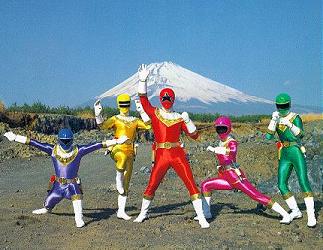 Only those who have learned the power of the Super-Civilization will be able to save humanity from its greatest crisis: Baranoia, the Machine Empire, which plans to invade the Earth!
- The Opening Narration, which got retired quickly- after episode 6!.
Advertisement:

Chōriki Sentai Ohranger (Super-Powered Squadron Ohrangernote "Oh" has many possible meanings, from being an acronym for Overtech Hardware to being the Japanese word for king to being short for olé or aura.) is the nineteenth installment in Toei Company's Super Sentai series, airing from 1995 to 1996. It saw the return and final narrating gig of Nobuo Tanaka in the series.

Six hundred million years after being exiled from Earth by his creators on Pangaea, the evil robot Bacchushund has returned with his Machine Empire Baranoia in the year 1999. In order to counter the Baranoia threat, five officers of UAOH (United Airforce Overtech Hardware) must use technology from Pangaea itself to become the mighty Ohranger team.

The show commemorated the 20th anniversary of the Super Sentai Series, following the retroactive inclusion of Himitsu Sentai Gorenger and J.A.K.Q. Dengekitai two years earlier. It was also the first Sentai show to start the yearly crossover specials between the current team and previous one with Olé vs. Kakuranger. Though it began as a fairly-serious show, it was re-tooled into something lighter after the 1995 Tokyo subway sarin attack

It is the 4th Super Sentai to see a US release in November 2016. It can be streamed for free at Shout! Factory TV