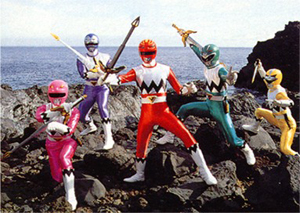 Five elements of the galaxy gather together!
The Starbeasts: They are mysterious animals who fight for the sake of defending harmony in the Milky Way!
Advertisement:

Seijū Sentai Gingaman (Star Beast Squadron Gingamannote Ginga is the Japanese word for "galaxy", but it's mainly a reference to the forest where the main characters comes from.) is the twenty-second installment in the Super Sentai series, running from 1998 to 1999. The title song was performed by Ryu Kisami.

3,000 years ago, the evil Space Pirates gang, the Balban, attempted to conquer Earth. They were foiled and imprisoned by the mystical Starbeasts and their human companions, the Gingamen of Ginga Forest. Since then, the mantle of the Gingamen was passed down through the generations of Ginga Forest. On the day of the appointment of the 133rd generation, an undersea earthquake releases the Balban from their imprisonment. In their attempt to kill the newest Gingamen, Hyūga, the appointed Ginga Red, is swallowed up in the Earth. Before he falls in, he passes on the duty to his brother, Ryōma. The Gingamen thus begin their mission to foil the Balban's scheme to revive Daitanix, the monster whose back houses the Balban's castle.

The series is free to stream on Shout! Factory TV