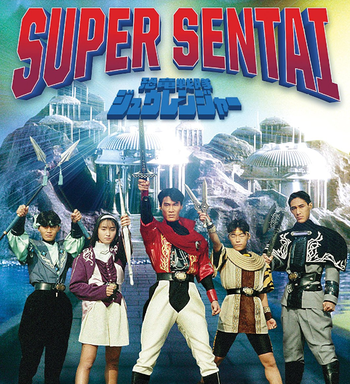 Go Go Pow-- whoops, wrong side of the Pacific.
More than 170 million years after the time of the dinosaurs, the five rangers have been resurrected!
Advertisement:

Kyōryū Sentai Zyuranger (Dinosaur Squadron Zyurangernote "Zyu" is an alternate romanization of jū or "beast".) is the sixteenth entry in the Super Sentai franchise, which aired from 1992 to 1993. It saw the return and final narrating gig of Toru Ohira in the franchise. The Title Theme Tune was performed by Kenta Sato.

170 million years ago, humans lived in peace with dinosaurs, until the evil witch Bandora appeared, killed the dinosaurs, and began to attack humanity. The Guardian Beasts, great gods in the form of prehistoric-animal-shaped Humongous Mecha, sealed her away on the stray planet Nemesis. In modern times, astronauts exploring Nemesis accidentally release Bandora and her followers from captivity, and she again starts to attempt to kill humanity, starting with the children. The ancient wizard Barza, in disguise as a building superintendent, releases five warriors from the five prehistoric human tribes from suspended animation to fight Bandora's forces alongside the Guardian Beasts. The series is free to stream at Shout! Factory TV

This series is very important for five reasons:

Example of:
Attack the Mouth