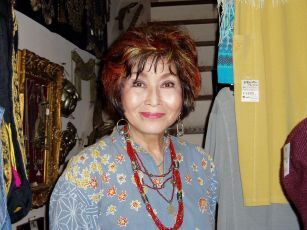 Machiko Soga (曽我町子) (March 18, 1938-May 7, 2006), known to some as the "Queen of Tokusatsu Villainy", was an actress/voice actress for many years. She's probably best known for being Bandora the Witch/Rita Repulsa in Kyōryū Sentai Zyuranger/Mighty Morphin' Power Rangers and the voice of 007 in the 1968 version of Cyborg 009. She debuted in anime as the titular character in Little Ghost Q-Taro. In the 70s and 80s, she moved to live action, eventually stacking up a resume rivaling that of Shōzō Iizuka.
Advertisement:

Passed away a year after her final TV role as Magiel in Mahou Sentai Magiranger. (As a tribute, producers used that footage as Rita Repulsa as the Mystic Mother in Power Rangers Mystic Force.) Her true final role was the Man Behind the Man in the Space Sheriff Spirits video game for PlayStation 2.