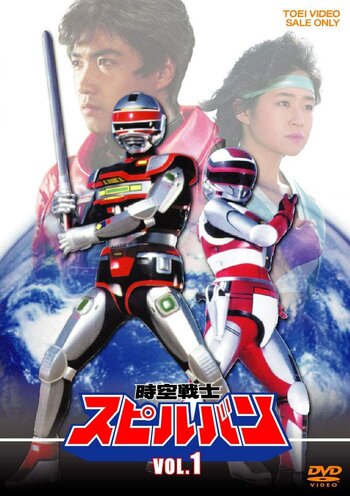 Klin is a beautiful planet blessed with an abundance of fresh water. And it is because of this wealth that Waller, a warring empire, invades the planet and ravages it for its liquid wealth.

Two years later, with nearly no water or natural resources left on their planet, the survivors pin their last hopes on two children and send them to Earth, a planet with similar environment to Klin. These two children are Spielban & Diana.

12 years after their arrival, they finally wake up from their sleep. Receiving the knowledge of the history and culture of Earth, they continue their growth as soldiers.

Then, the Wahrer Empire approaches Earth, with the intent of raiding Japan for its water. To stop them and to protect the planet, Spielban & Diana stand up to them, but deceptions, lies, heartache, and the painful truth awaits the two of them...

This is one of the series used as source footage to create VR Troopers.

Example of:
Ass Kicks You