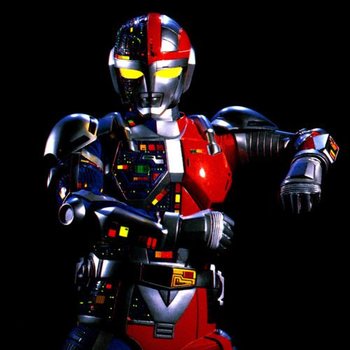 IKARU!
"In 1987, more than forty years after World War II, the "Choujinki", an ill-fated ultimate weapon built in the final stages of the war, but never deployed, is put into action as the only hope in the battle against the merchants of darkness working in the shadows of peace and their frontline troops the Neros Empire. This is a record of Choujinki, a weapon that gave its power and limited life, not to the cause of mass death and destruction, but to peace."
— Plot summary from the DVD release.
Advertisement:

Chōjinki Metalder ("Super-Android Metalder") is the sixth entry in Toei's Metal Heroes franchise, which aired in 1987 (lasting 39 episodes and a movie). Essentially a Spiritual Successor to Kikaider (and thus departs from the staples of the franchise, such as fighting aliens and having a massive airship base).

In 1945, at the end of World War II, Professor Ryūichirō Kōga was forced into creating a super weapon for the Japanese Imperial Army. Patterning his creation to resemble his dead son Tatsuo, Professor Kōga placed his cyborg into suspended animation because of his pacifist leanings against war.

42 years later, Professor Kōga's former assistant Kunio Muraki, now posing as a wealthy philanthropist named Kirihara Gōzō, has used a combination of science and alchemy to prolong his existence and to eventually attempt to raise Japan as a military nation again under his control as God Neros. Kōga decides to activate Metalder again to combat the menace.

Instilled with pacifist directives, Metalder is unable to combat the threat until Kōga allows himself to be killed by the Neros Empire, which drives Metalder to seek a path of vengeance. Conflicted by both his desire for justice and his peaceful ways, Metalder, under the new "human" guise of Ryūsei Tsurugi, attempts to find a balance in his artificial life while battling the forces of evil.

Metalder was one of the series that were used to create VR Troopers.