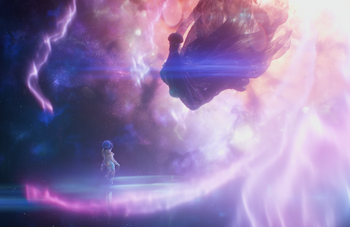 "Space is big. You just won't believe how vastly, hugely, mind-bogglingly big it is. I mean, you may think it's a long way down the road to the chemist's, but that's just peanuts to space."
— The Hitchhiker's Guide to the Galaxy
Advertisement:

An index of works set in space. While it obviously includes a lot of Science Fiction works, not every one of them has to be set in space. Nor does being set in space necessarily make a work Sci-Fi. This can mean things like Science Fantasy and Wizards from Outer Space.

Compare Alien Works and Space Episode. Also, while the work can also take place on planetoids or moons, it should at least mostly happen in space.