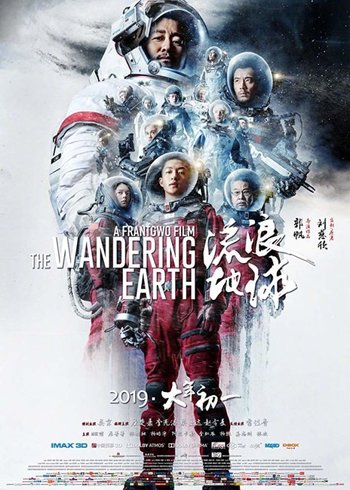 This long voyage of hope and despair will endure 2,500 years through the cosmos. It is also known as... The Wandering Earth Project.
Advertisement:

The Wandering Earth (Chinese: 流浪地球, Pinyin: Liúlàng Dìqiú) is a 2019 live-action science fiction film directed by Frant Gwo, based on the novella by Liu Cixin, and starring Wu Jing. It is currently the second highest-grossing non-English film, surpassed only by Wolf Warrior 2.

In the near future, the sun is exhausting its fuel, and will soon turn into a red giant, destroying the entire Solar System in three hundred years. Under threat of planetary annihilation, humanity bands together to construct 12,000 enormous "Earth Engines" on Earth's surface to propel it out of the Solar System to a new home. However, upon approaching Jupiter to make use of gravity assist, thousands of engines get knocked offline all across the globe, threatening to plunge the entire Earth into Jupiter.

It was released on Chinese New Year's Day (February 5th, 2019) and later picked up by Netflix on April 30th.