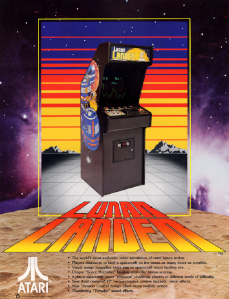 Lunar Lander is a series of Simulation Games about landing an Apollo 11-style lunar module on a rocky lunar surface. You have a limited amount of fuel with which to maneuver the lander on to level platforms.
Advertisement:

The first versions were written in the late 1960s and early 1970s by Jim Storer, Eric Peters, and William Labaree II for DEC minicomputers, and published as BASIC type-in programs. The earliest version was created in 1969. The first version with graphics was released in 1973 as a Tech-Demo Game for a DEC's new GT40 vector graphics terminal. Atari released an Arcade Game version in 1979. This version featured one of the first examples of Bribing Your Way to Victory, or at least more gameplay, because it's an Endless Game: You could insert coins during gameplay to buy more fuel.

It later became a Mini-Game in other games, and was ported to every platform imaginable, even pocket calculators. There are now several free versions online.