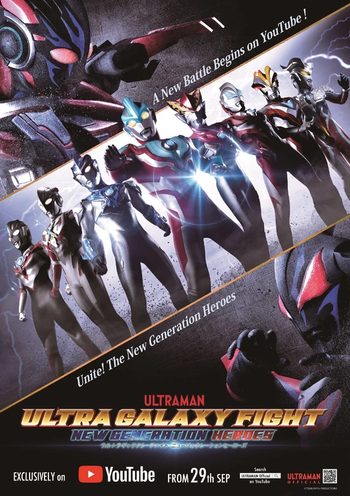 Ultra Galaxy Fight: New Generation Heroes is a 2019 tokusatsu spin-off micro-series created by Tsuburaya Productions and part of the Ultra Series. Unlike most Fight Series (eg; Ultra Zero Fight, Ultra Fight Victory and Ultra Fight Orb), this show is set to be aired in September 29, 2019 as a YouTube-exclusive mini series and is aimed towards worldwide audiences, hence each episodes will have both Japanese and English dubs as well. Koichi Sakamoto would direct the miniseries, while Junichiro Ashiki did the screenplay, just like the Fight Victory and Fight Orb.

The plot begins with Ultraman X and Ultraman Geed being defeated by their Evil Knockoffs on a distant planet, while Ultra Dark Killer had banished Ultraman Zero and Ultrawoman Grigio into his pocket dimension. To stop the League of Darkness, Taro and the Ultra Brothers summoned the help of the rest of the New Generation Heroes. As the series took place after Ultraman R/B The Movie, but before Ultraman Taiga, it would lead to the particular Cold Opening scene from episode 1 of Taiga where the New Generation Heroes (barring Grigio) went on a chase against Tregear and defeated by the rogue Ultra, as well as giving the Tri Squad their lights as a parting gift. This spin-off also features the canon on-screen appearance of Ultraman Ribut.

. Here is also a link for director Koichi Sakamoto's commentary

A sequel by the name of Ultra Galaxy Fight: The Absolute Conspiracy has been announced, with the focus on Ribut, Zero and a pre-Rayblood Belial.

For their character sheet; see here.