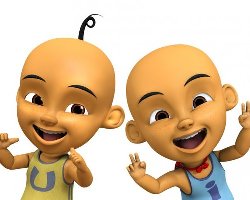 Guess who's who...* Look at the shirts.
Advertisement:

Upin & Ipin (known as Upin dan Ipin in their own language) is a Malaysian All-CGI Cartoon. A television series of animated shorts produced by Les' Copaque Production. It follows the life and adventures of the titular twin protagonists, Upin & Ipin. Along with their friends, they learn lessons and the importance of values though it's actually a little more than that if you are familiar with Malaysian customs and culture, the latter which has been almost the main theme that makes the show itself, quite familiar in their home country but a distinct feel to foreigners who are unaware with the traditions thereof.

Starting production in 2007, it has since been continuously renewed and has reached fifteen seasons (as of 2021). Besides being acclaimed in its own country, it has also been acclaimed in other parts of Southeast Asia (notably, Indonesia: a country that shares linguistic and cultural similarities, which the cartoon later features a character from there).

Upin & Ipin celebrates that they're lost before wondering what "lost" means.

Example of:
I've Heard of That  What Is It?

Upin & Ipin celebrates that they're lost before wondering what "lost" means.