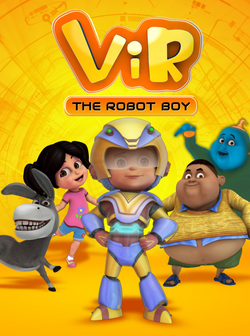 ViR: The Robot Boy is an Indian animated series about the adventures of the robot boy ViR, who lives with his inventor Dr. Sahay and defends the city while also hanging out with his friends, a human girl named Imil, a talking donkey named Chulbul, and a jinn boy named Gintu. It aired on Hungama TV and ran from 2013 to 2016 for 81 episodes.