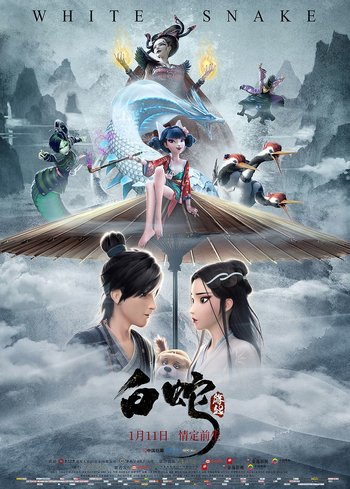 White Snake is a Chinese Wuxia All CGI Animated Film released on January 11th, 2019. It was directed by Amp Wong and Zhao Ji, with animation by Light Chaser Animation. The movie's co-producer Warner Bros. distributed the film in other major countries.

Set in the late Tang Dynasty, the film takes place 500 years before the famous Chinese fable Legend of the White Snake, serving as a Prequel to the original tale.

The story follows the titular white snake, Xiao Bai/Blanca, a snake demon and a member of a snake clan that loses her memory after she failed to assassinate the Daoist leader targeting snakes for his dark rituals. She wakes up in a snake-catcher village, under the care of the human snake catcher Ah Xuan.

The two end up assuming that she's a human and embark on a journey to recover her memories, falling in love in the process. During their journey, they're pursued by the Daoist forces and her previous snake clan members, such as her younger sister, the green snake-demon Xiao Qing/Verta who is strongly displeased by her sister's newfound fondness for humans.

Not to be confused with The Sorcerer and the White Snake, which is also based on the same myth, the band Whitesnake, or Enrico Pucci's Stand.

Tropes in this film include