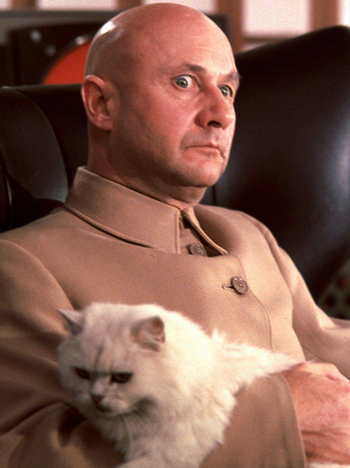 Hello, I'm Ernst Stavro Blofeld. Will you be an angel for a helpless animal?
Marplet sen Tenko was sitting in a window of the Skyrrman smoking a long-stemmed pipe. His big tiger-tom, Fang, crouched beside him on the sill. As Jame crossed the square, both the innkeeper and the cat watched her with almost the same expression, calculating, self-confident, and faintly amused. Neither would relish a quick kill, she realized with sudden insight.
— Chronicles of the Kencyrath
Advertisement:

In an evil contrast to how much Heroes Love Dogs, Diabolical Masterminds are cat people. If they don't have a face, they will usually have a pet cat, usually some shade of white or black, sitting on their desk or in their lap, that they stroke as they describe their Evil Plan.

Why do bad guys like cats? Maybe because Cats Are Mean — they kill birds and mice, just so they can offer you the corpse. Cats are lap-sized and perfect to pet while scheming. Or maybe it's because Cats Are Superior and believe they are entitled to be worshiped and revered by humans, or deserve to Take Over the World themselves. Dogs are faithful and loyal, but cats are fickle with a superiority complex. Villains and cats just fit. It's the perfect accessory for a Card-Carrying Villain, especially the Crazy Cat Lady type.

The Big Bad's Right-Hand Cat will have varying degrees of a personality depending on the context of the series. Some will display sentient facial expressions and even an evil laugh, showing a morality in sync with their master's. Some just sit there, emotionless, yawning and purring like any other ordinary pet. Even in animation, the cat will probably never speak, but it will almost always have a name.

This may stem from the tradition that All Witches Have Cats and often use cats as their familiars. Sometimes prone to the cat being a Morality Pet or biting back and run a Heel–Face Door-Slam if the Big Bad doesn't dispose it.

In more-modern settings, this kind of villain will be probably part of an Animal Wrongs Group.

See Kindhearted Cat Lover for heroic examples when a character's fondness for cats shows they're a good person, or at least not all bad.

was a famous cat-lover (he owned 14 cats at the time of his death) and he got a Historical Villain Upgrade since Alexandre Dumas' The Three Musketeers. Most adaptations picture him petting a white cat while scheming, making Richelieu the likely Trope Maker.

Pirate captains will have a Pirate Parrot instead. See also Feather Boa Constrictor.

Please note that Right-Hand Cat at its core refers to passive evil pets, feline or otherwise. If the pet is also an active fighter, it belongs in Right-Hand Attack Dog, even if it is a cat.

Subversions and Playing with the trope