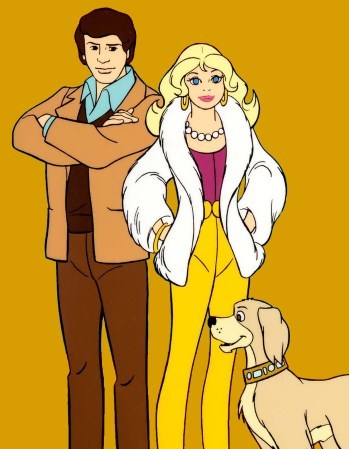 A Saturday Morning Cartoon from 1981, this was Ruby-Spears' attempt to follow the lead of then-upcoming film Raiders of the Lost Ark (which came out before the show was released, but the show started production before that), by using the "mismatched couple has globe-trotting adventures" theme that would become popular during the 1980s.

The premise of the series, as spelled out in the opening, is that 18-year-old Goldie Gold, the "world's richest girl", founded her own newspaper, "The Goldstreet Journal". She and her companion, daredevil reporter "Action" Jack Travis, go on adventures across the globe solving crimes and reporting on them to the paper's editor, Sam Gritt. The series featured a new villain and caper each week, and an array of fantastical and improbable gadgets that helped Goldie and Jack in essentially any situation. The Richie Rich comparisons were inevitable, though despite many jokes about the sort of things Goldie could buy, the focus was more on the action and adventure while the gadgets simply appeared to keep the plot moving. The show also tended to follow some fairly familiar tropes of contemporary series, particularly shows on which Joe Ruby and Ken Spears had worked for Hanna-Barbera.

The show ran for a single series of 13 episodes on ABC, reran until September 1982, then faded into relative obscurity as Ruby-Spears quickly shifted to selling shows based on licensed properties.

As a side note, Jack Kirby did the character designs.