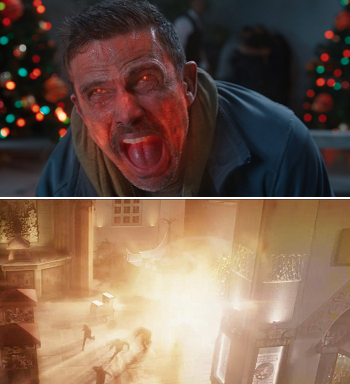 Super powered individuals are, believe it or not, closely related to nuclear reactors. Oh sure, they don't (usually) eat uranium, or even have a nuclear accident to credit with their powers, but when facing critical injuries or mental attacks they run the risk of losing control of their powers and going into a Superpower Meltdown the likes of which could make Chernobyl look like a radioactive cough by comparison.

This depends on the power in question and its source. Nuclear and radiation based heroes have a distressing tendency to go nuclear under duress, but any super with enough raw power can have a meltdown, no matter the source: psychic, mystic, or technological. Sometimes the power builds up inside the body by themselves; not releasing it regularly may mean disaster. Normal people using a Artifact of Doom can inadvertently cause it (or their body) to self-destruct. This can also happen to heroes abusing Explosive Overclocking, who may enter Heroic RRoD and start showing Volcanic Veins. Villains who are Drunk on the Dark Side might take One-Winged Angel a level too far and peter out humiliatingly. A genetically empowered hero may discover the hard way pure humans have a longer lifespan. Shapeshifters will usually go lose control of their Shape Shifter Mashup and go into a Shapeshifter Swan Song. Common side effect of Going to Give It More Energy.

Less lethally, if the hero/villain is only modestly powered or hit with Green Rocks to cause a short circuit, then the meltdown might only take the form of their normal power causing random effects. Like telekinesis mimicking a poltergeist rather than de-atomizing everything, or a pyrokinetic setting nearby objects on fire rather than exploding. Should their power require constant concentration to keep stable, then any effect that destroys their concentration could be potentially fatal for all involved.

A common occurrence is for a hero going into meltdown to be coaxed back from the brink using Heroic Willpower, or forced to do a Heroic Sacrifice and fly away to save those nearby. If a Love Interest is nearby, a Cooldown Hug can reliably stop the meltdown. Occasionally, a hero or villain might purposefully trigger it to try and kill their rival, since the Sphere of Destruction such a meltdown generates tends to be pretty devastating. Whether this works on not depends on if they're the lead.