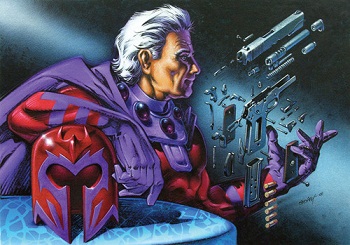 Electromagnetism is a strange beast. It's one of the four fundamental forces of nature

, the others being gravity, the weak nuclear force (radioactive decay), and the strong nuclear force (binds atoms together). In Real Life it's not at all as powerful as superpowers portray them in fiction.

In fictionland the power of magnetism is treated as if it's like Telekinesis, but specifically with power over metals and alloys, and since its substance is magnetic fields, this is a Sub-Trope of Single Substance Manipulation. How powerful this is varies. These characters if too powerful can just fold their arms and let their Powers Do the Fighting and will never even have to touch you themselves. They'll be floating in the air, levitating steel girders around, and lobbing them at you, and while those normally weigh tons they do this with just a flick of their hand. Plus being able create extra appendages with spare junk lying around. On the other hand, when this is downplayed this can take the form of the character being literally magnetic with metal just sticking to them wherever they go, but not having very good control over it. This is often played for comedy, because what kind of lame power is that anyway?

Sometimes characters with these powers will be fully electromagnetic and can manipulate electricity as well. This is far broader than just simple magnetism because now their arsenal of abilities includes control of plasma and radiation. Depending on how much they know about the science of magnetism, they may have won the Superpower Lottery, as this could give them the power to, to an extent, manipulate the other three forces of nature — bending light (possibly giving them cloaking powers), or being able to disassemble the very atoms that make up an object.

There is also Esoteric Magnetism, which is more like "magical magnetism". Someone is capable of manipulating objects via the concept of "attracting" or "repelling", regardless of whether the object is magnetic or not. Sometimes, it even applies to non-objects like emotions.

Artistic License – Physics definitely applies to works that use magnetism powers. Shock and Awe and Extra-ore-dinary are Sister Tropes. Often involves Selective Magnetism and Hollywood Magnetism. Magnetic Weapons is when technology uses the force of magnetism for guns.