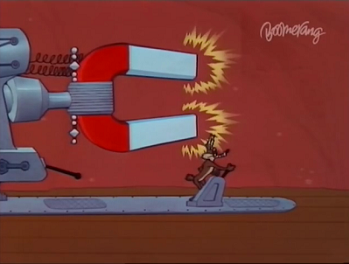 Exeter: Place your hands above the rails. They're magnetized.
Mike: And if your hands were metal, that would mean something.
— Mystery Science Theater 3000: The Movie
Advertisement:

Works of fiction frequently portray the effects of magnetism in a way that is inconsistent with Real Life. This can be because the writer did not do the research or because the "different" magnetism is a plot device. In video games, magnetism can be functionally equivalent to Inconveniently Placed Conveyor Belts. In comedic works, magnetism can be required by the Rule of Funny.

Subset of Artistic License – Physics. Often overlaps with Selective Magnetism and sometimes Magnetism Manipulation, but there are distinct differences:

Please make sure that your example of magnetism as used in fiction goes to the right trope.