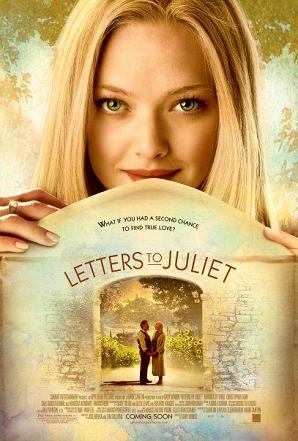 Letters to Juliet is a 2010 romantic drama starring Amanda Seyfried and Chris Egan, Vanessa Redgrave and Franco Nero. It is the tale of Sophie, a young American who travels to the city of Verona, on a "pre-honeymoon" with her fiance Victor. Verona was the home of Juliet Capulet of Romeo and Juliet fame, and due to a series of distractions and divisions, Sophie ends up joining a group of volunteers who respond to letters to Juliet seeking advice about love while her fiance drives round northern Italy looking at mushrooms and cheeses.

One letter dated 1957 falls out from behind a brick and describes how a young British girl, Claire, left her lover, Lorenzo Bartolini, waiting under their tree and went back to England. Sophie replies to Claire which inspires Claire to travel to Italy in search of her long-lost love (dragging along her grandson Charlie). The three of them set off on a trip round Tuscany to find all the men named Lorenzo Bartollini. She will know the right one by his eyes. Sophie hopes to write an article on it for her magazine and earn a promotion to writer as she is only a fact-checker. But of course, things are going to change on the trip.

(This was director Gary Winick's final film before his early demise at 49.)