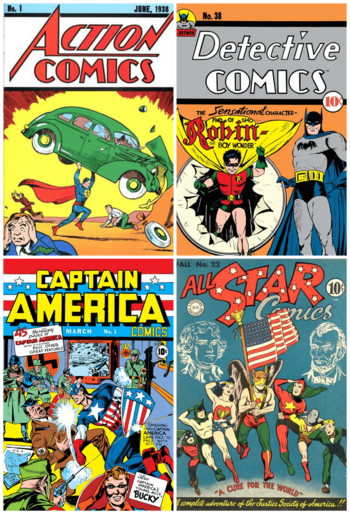 This was also the era of the Sidekick. After Robin was introduced in 1940, nearly every hero picked up a young lad or lass to assist them in crimefighting. The Human Torch had Toro; Sandman had Sandy, the Golden Boy; Bulletman had Bulletgirl. Plucky Comic Relief adult sidekicks were also popular; they were usually fat and clumsy, like Green Lantern's Doiby Dickles or Plastic Man's Woozy Winks. This being in an era when segregation was legal, a few regrettable characters showed up here as well, especially the Whizzer's "Slow Motion" Jones, a chubby black man with huge lips and a heavy drawl.

However, those who are familiar with The Silver Age of Comic Books are sometimes surprised to learn that Golden Age comics are often significantly less goofy, less moralistic and less blatantly childish by comparison. The 1930s and 1940s were in many ways a less conservative era in the U.S. than The '50s, and The Comics Code didn't exist yet. Creators were much less concerned about making their stories age-appropriate and portraying heroes as moral exemplars. Superman was a rougher, more aggressive, somewhat mischievous character, described by his creators as "a thorn in the side of the establishment" — hardly the paragon of Lawful Good we have today. Batman was a dark and violent vigilante long before the Comics Code Authority turned him into a camp icon.note Although his notorious gun usage and willingness to kill are a case of Briefer Than They Think, lasting less than two years, the stories were indeed more violent and the villains more murderous. Possibly as a reflection of real-life women moving into traditionally masculine roles as men left for the war, Golden Age female characters tended to be bold, assertive, fast-talking career gals, often tougher and more independent than their Silver Age counterparts. (This may also reflect the fact that a larger percentage of the comic-reading audience was female during the Golden Age than at any time after.)

Usually accepted as lasting from the publication of Action Comics #1 to the early 50's. 1938–~1950. For other applications of the term "Golden Age", see:
End of an Age, The Time of Legends, Nostalgia Ain't Like It Used To Be.