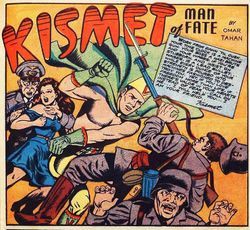 Kismet: Man of Fate is a Superhero from The Golden Age of Comic Books, created by Ruth Roche and published by Elliot Publications in Bomber Comics #1-4, most notable for being one of the earliest Muslim superheroes. He's a Badass Normal who fights Nazis as part of the European Resistance.