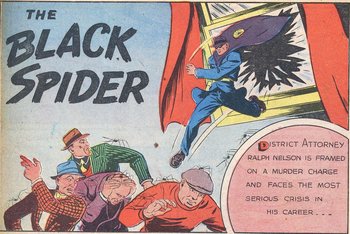 The Black Spider is a Superhero comic from The Golden Age of Comic Books, published by Ace in Super-Mystery Comics v1 #3-6 and v2 #1-6. It chronicles the adventures of District Attorney Ralph Nelson, who donned a Coat, Hat, Mask ensemble and trained spiders to take out criminals who snuck through the law's grasp.

Not to be confused with the minor Batman villains of the same name.