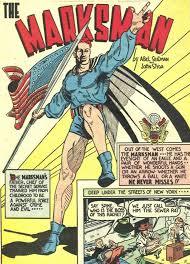 The Marksman is a Superhero from The Golden Age of Comic Books, published by Centaur in Amazing-Man Comics #23.

John Courage was son of the head of the United States Secret Service. During his childhood, he was trained in the art of shooting. Now, he's so good that he never misses. He uses his marksmanship to fight evil. In his only adventure, the Marksman thwarts a mysterious criminal's plot to steal military secrets.