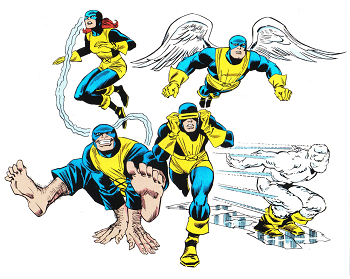 Game Master: What will YOU do this turn, Cyclops?
Cyclops: [deadpan, despondent and bored] ...I shoot it with my Optic Blast.
— Noah Antwiler (summing up a common problem with this trope), Counter Monkey
Advertisement:

There are many superheroes out there. Some, like Batman, do their super-heroing using years and years of training their bodies, showing human capability to a remarkable extent, possibly with the help from a utility belt as well. Others are like Superman, having a whole grab-bag of superpowers that needn't even be remotely related in some of the extreme cases. Then, there are superheroes like Cyclops. Beast Boy. Static. The middle-roaders. The ones that only have one listed superpower, but which they sometimes have many uses for.

As you can guess, this trope excuses unmentioned Required Secondary Powers, since they often aren't a power in their own right, though the line can get a little fuzzy at times. Elemental Powers are a sub-trope of this. In a show with Cast Speciation, this can easily become What Kind of Lame Power Is Heart, Anyway?. (See Hawkman in the Superfriends cartoon.)

One Person, One Power is when this applies to every powered person in a setting.