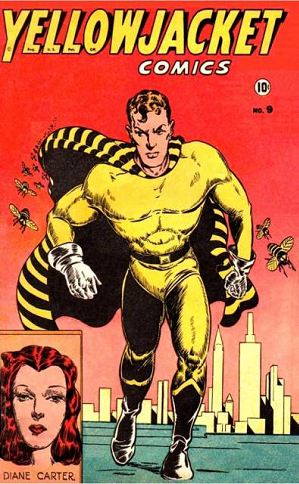 Yellowjacket is a Superhero from The Golden Age of Comic Books, published by Charlton Comics in Yellowjacket Comics 1-10 and Jack in the Box Comics 1.

Crime author Vince Harley is thinking of a new novel premise when one comes to him. You see, Judy Graves appears near his house, bringing the mob after her. In the ensuing scuffle, Vince learns that he can communicate with bees. Using his newfound abilities, Vince defeats the gangsters and embarks on a new career as "the Yellowjacket"

Grant Morrison brought him to the DC Universe in The Multiversity. This page is for his Golden Age incarnation.

Not to be confused with one of the many identities of Hank Pym.