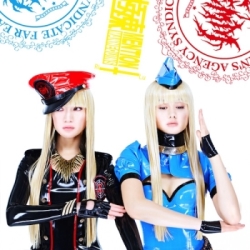 FAR EAST MENTION MANNEQUINS AGENCY SYNDICATE is a top secret organization with the goal of liberating mannequins from human oppression by turning them into "FEMMs": sentient mannequins capable of moving and acting on their own free will. To accomplish this, FEMM's Acency Syndicate has released two FEMMs into society to scout out mannequins that have the potential for FEMM-ization: SW-000000 aka "RiRi" and MS-000000 aka "LuLa." RiRi and LuLa are handled by the organizations two most elite agents, Honey-B and W-Trouble. RiRi and LuLa have been spotted throughout Tokyo as seemingly-worthless mannequins begin to disappear...

FEMM is also a Japanese pop duo that surfaced in 2014. If you haven't already guessed, they are heavy on the "concept" aspect; they may be more accurately described as an ambitious art project than a music act, employing world-class talent from several mediums. FEMM is backed by the producers of such big name stars as Beyonce and Lady Gaga, resulting in music that is probably more familiar to American ears than Japanese ones (their lyrics are also entirely in English). Also of note are their music videos, which have been released at a steady pace since the beginning of 2014, each one different from the last but all of them undeniably impressive. Finally, intricate and robotic choreography is provided by HIDALI, the choreographer behind Genki Sudo's equally novelty group WORLD ORDER. The mannequins also remain in character at all times.

(available in English as well as Japanese). Their music videos can all be found on their official YouTube channel