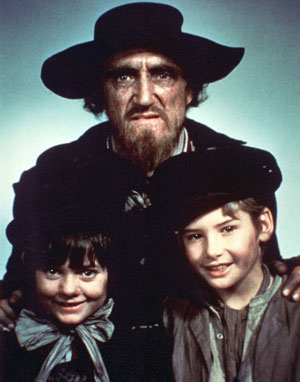 You've got to pick a pocket or two, boys...
Ego: I hired Yondu to pick you up after your mother passed away. But, instead of returning you, Yondu kept you. I have no clue as to why.
Peter Quill: I'll tell ya why; I was a skinny little kid who could slip into places adults couldn't. Made it easier for thieving.
— Guardians of the Galaxy Vol. 2
Advertisement:

A crook who takes in children, usually orphans, and has them steal for him, usually through pickpocketing, The Con or both. Like the original Dickens character, this trope is subject to two distinct interpretations. Sometimes, the character will be a Lovable Rogue and will be presented as essentially giving the children the best life possible. On the other hand, other versions of this are cruel exploiters and function similarly to the Orphanage of Fear. Less sympathetic examples may qualify as a Babysitter from Hell or even worse.

Sometimes, just sometimes, The Fagin may actually love the children who work for him like a father, and there are few things scarier than a Papa Wolf Fagin, who is not above using his extensive underworld connections to absolutely torture to death those who harm his children.

Expect to find The Artful Dodger among his crew. If the Fagin's charges grow up successfully, they will likely become Satisfied Street Rats. Related to the Thieves' Guild. The children involved automatically qualify as a Tyke-Bomb. Compare King of the Homeless. See also Evil Orphanage Lady.

The trope is named after Fagin, a character from Charles Dickens' Oliver Twist who is so associated with this trope that his name is actually next to it in the dictionary. He even fulfills both interpretations, depending on the adaptation.