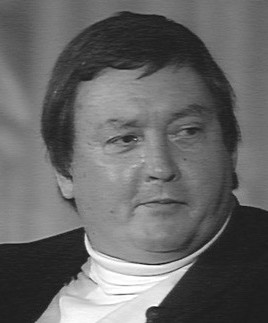 "...it all sort of came together. Barry Letts became producer, I took over as script editor, Jon Pertwee became the Doctor, the show went into colour, and the whole thing clicked."
Terrance Dicks, on how Doctor Who was turned around after he joined it
Advertisement:

Terrance William Dicks (14 April 1935 – 29 August 2019) was, of all the Doctor Who franchise's myriad behind-the-scenes contributors during its classic era, probably the closest thing the show had to a single public face. As script editor and writer on the original 1963-89 run of the television series, noveliser of many, many of the stories and author of further Spin-Off novels, and a latter-day all-round benign 'godfather' to and commentator upon the franchise, he contributed more to the series and was involved with it for a longer period of time than anyone else.

A hugely prolific writer, the vast number of popular and accessible novelisations that he produced of the TV adventures — especially during an era when these were often the only way to revisit past stories — mean he could be plausibly claimed to have introduced more British children, especially boys, to a love of reading than just about any other author to have ever lived. He became beloved of generations of Whovians to the extent he acquired the Fan Nickname 'Uncle Terry'.

Dicks was first hired as assistant script editor on Doctor Who in early 1968 through the recommendation of his friend and fellow writer Malcolm Hulke. He became full script editor later that year, starting with "The Invasion". He and Barry Letts, the producer, had creative control of the show for all five seasons in which Jon Pertwee played the Third Doctor. The equally legendary Robert Holmes (a very different kind of writer though equally notable in Who terms) took over from him.

Although he was not credited as a writer on any of these stories, Dicks made heavy contributions to the scripts during his era and presided over (or at the very least allowed to happen) the creation of the core mythology of the Whoniverse. He co-created the Time Lords and their non-intervention policy, and the Doctor's archnemesis the Master. Even though UNIT did not originate with him (but did first appear in a story he script edited), he nurtured the concept along and presided over the promotion of the Brigadier from guest star to series regular.

Outside his period as script editor, Terrance Dicks co-wrote the Second Doctor's concluding story The War Games with Malcolm Hulke. By himself, he wrote the Fourth Doctor's debut Robot and further adventures Horror of Fang Rock and State of Decay — plus an early version of The Brain of Morbius, but asked for his name to be removed from the story because of the extent to which the scripts were rewritten for budgetary reasons by his friend (and then-current Script Editor) Robert Holmes. Come the Fifth Doctor's era, he was the obvious go-to man to pen the 20th anniversary multi-Doctor special The Five Doctors.

His most visible contribution to the franchise, however, was his involvement with the Doctor Who Novelisations for Target Books from 1973 to the end of the original TV show. He personally wrote over sixty of the novelisations and acted as an unofficial head writer and administrator for the series.

During the "Wilderness Years" following the television show's cancellation in 1989, Dicks wrote thirteen original novels across the various prose sections of the Doctor Who Expanded Universe. Among the most significant were the second Doctor Who New Adventures novel Timewyrm: Exodus, and the first Eighth Doctor Adventures novel The Eight Doctors.

Other oddments in the Who franchise include the stage plays Doctor Who and the Daleks in the Seven Keys to Doomsday and The Ultimate Adventure, and their audio adaptations, the novelisation of The Sarah Jane Adventures' first episode Invasion of the Bane, and, with Malcolm Hulke, the first-ever Doctor Who nonfiction book, The Making of Doctor Who, as well as a few other nonfiction Who works. He also recorded many, many DVD Commentaries and documentary appearances.

Old-school fans still often demanded that he be invited to write a TV story again for the revived 21st-century series. Dicks would eventually go on to contribute to the modern show with Revenge of the Judoon, a "quick read" novel aimed at a younger age range.

Outside his work for Doctor Who, he wrote well over a hundred original books for children, mainly in the crime, adventure, and Funny Animal genres.

After leaving Doctor Who, Dicks and Letts created an extremely grim hard science fiction BBC show, Moonbase 3. The series did not last long. He then worked on many adaptations of classic novels and other literature for the Beeb. His early pre-Who TV work included episodes of The Avengers and Crossroads.

Dicks was still appearing at Doctor Who fan conventions and on DVD Commentary into his 80s. He passed away on the 29th of August 2019 at the age of 84, to the sorrow of his many fans and work colleagues from throughout his long and storied career, receiving a cavalcade of tributes from writers and producers who had been associated with and inspired by Who of all eras.