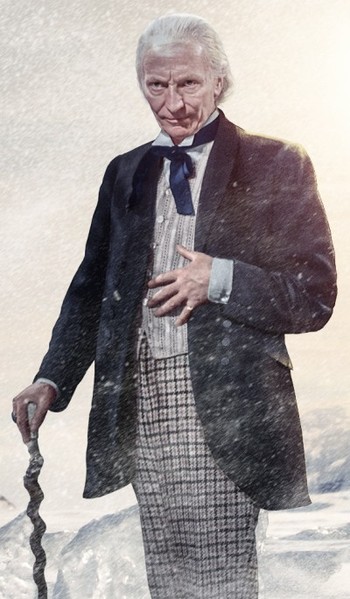 "Have you ever thought what it's like to be wanderers in the Fourth Dimension? Have you? To be exiles? Susan and I are cut off from our own planet — without friends or protection. But one day we shall get back. Yes, one day."
Click here to see him in "The Five Doctors" 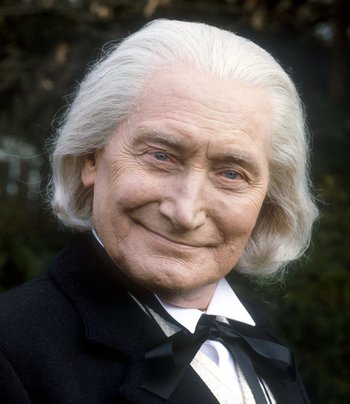 Click here to see him in "Twice Upon a Time" 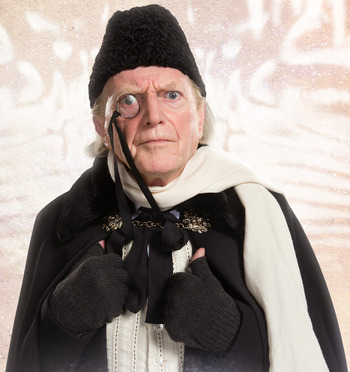 The first known incarnation, the monocled, wild-eyed portent of doom. Introduced as a fugitive with an air of mystery about him, One was a merry misanthrope with a mischievous side, who loved manipulating people and playing games with their lives. His moral compass had long since deteriorated before leaving home, which raises the question of what could have possibly happened to him there...

What we do know is that he and his granddaughter, who took the human name "Susan", left Gallifrey in a stolen TARDIS and eventually ended up on 20th Century Earth. Susan enrolled in a local school, but her, um, strange behaviour attracted the attention of two of her teachers — Ian Chesterton, her science teacher, and Barbara Wright, her history teacher — who discovered their secret. The Doctor kidnapped them and forced them along to make sure they kept their mouths shut.

However, Barbara and Ian had little patience for the arrogant, cowardly snob they found themselves sequestered with and gave him a much needed dressing down — after their first three adventures together he became a much more patient, kinder, and altruistic figure, but also established that he was in charge of the TARDIS crew.

As he was never intended to be the "first" Doctor, there is novelty in watching him develop into the Doctor as he's known today.

The First Doctor is unique that he's been the subject of The Other Darrin twice throughout the show — first by Richard Hurndall for "The Five Doctors", and then David Bradley for "Twice Upon a Time". Bradley at 75 is the oldest actor to play the Doctor onscreennote unless you count 83 year old Tom Baker in the reconstruction of Shada, breaking the short-lived record of 73 year old Sir John Hurt in 2013.

In 2018 Big Finish began a series of new First Doctor stories, with Bradley continuing in the role.

Tropes associated with the television series:

Tropes associated with the TV Comics

One gets heaps of Character Development through The Companion Chronicles and The Early Adventures, from flashbacks to his earliest days on Gallifrey to his final adventures with Ben and Polly. He was the first Doctor outside the monthly range to get his own original audio companion, Oliver.

On Christmas Day 2017, David Bradley took on the role for Big Finish's The First Doctor Adventures, reprising his role from "Twice Upon a Time", the Christmas Special that was released a few hours before the first two downloadable audios.note The audios were planned before it was even known Bradley would be appearing as the Doctor on television; Susan, Ian and Barbara are played by the actors who played Carole Ann Ford, William Russell and Jacqueline Hill in "An Adventure in Space and Time".

Tropes associated with his backstory