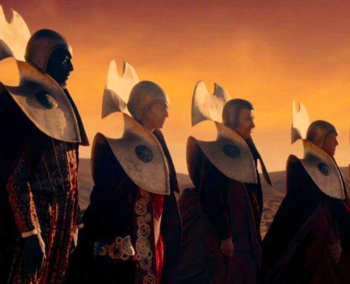 Wilf: But I've heard you talk about your people like they're wonderful.
Tenth Doctor: That’s how I choose to remember them, the Time Lords of old. But then they went to war, an endless war. And it changed them, right to the core. You’ve seen my enemies, Wilf. The Time Lords are more dangerous than any of them.
— "The End of Time"
Advertisement:

The Doctor's own people. They hail from the planet Gallifrey, and claim to be the universe's first civilization. Time Lords can travel through time and manipulate it to a huge degree. Though they generally operate under a policy of non-interference, they've also appointed themselves the guardians of the space-time continuum, and (at least in the Expanded Universe) look rather askance at attempts by the "lesser races" to develop time travel. The Doctor claims to have left Gallifrey in opposition to its xenophobia and stagnation.

The Sisterhood of Karn

The Sisterhood of Karn (Fourth, Eighth, and Twelfth Doctors) 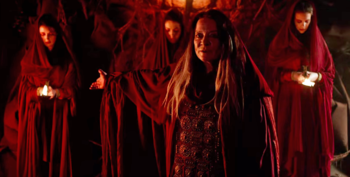 A mystic cult that originated on Gallifrey before they left and set up shop on Karn. They guard the Flame of Eternal Life which produces an Elixir that grants extended life; something Time Lords find handy if the regeneration process goes awry. They are currently led by the High Priestess Ohila.

"CIA, Celestial Intervention Agency. They get their fingers into everything"
— Castellan Spandrell, "The Deadly Assassin"

A shadowy organization on Gallifrey, whose primary mission is protecting the Time Lords and the Universe, no matter what. While the rest of Gallifrey stagnated, the CIA kept churning out new technology — like the Time Ring. They were the ones responsible for the Doctor's exile on Earth, seeing him as an ideal Rogue Agent. 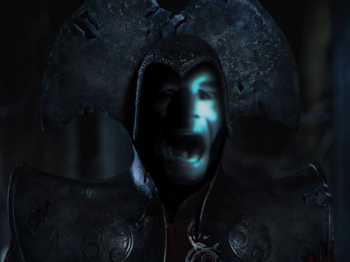 Also referred to by the name "Sliders", Cloister Wraiths are dead Time Lords, whose minds have been forcefully uploaded into the Matrix. They're found beneath the crypts of The Citadel, and guard the Matrix from intruders; acting as a sort of firewall, ensnaring their prey with fibre optic cables and reducing them to raw data. 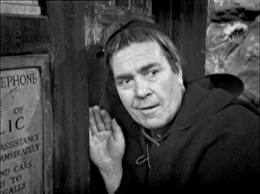 Played by: Peter Butterworth (1965, 1966)
First Doctor: Yes, I regret that we do [both come from the same place], but I would say that I am fifty years earlier. Now when are you going to answer my questions?
Monk: Which questions?
First Doctor: The reason for this deliberate destruction.
Monk: I, I want to improve things.
First Doctor: Improve things? Improve things, yes, that's good. Very good. Improve what, for instance?
Monk: Well, for instance, Harold, King Harold, I know he'd be a good king. There wouldn't be all those wars in Europe, those claims over France went on for years and years. With peace the people'd be able to better themselves. With a few hints and tips from me they'd be able to have jet airliners by 1320! Shakespeare'd be able to put Hamlet on television.
— "The Time Meddler"

In-Universe referred to as "the Monk", out-of-universe "the Meddling Monk". The first other member of the Doctor and Susan's (at that point, still-unnamed) species ever seen on-screen. In his first appearance, the Meddling Monk liked to "improve" history, or rather Earth's history with advanced technology. (He didn't ever mention altering any other planet's history.) In his second, he jointly wished for revenge against the Doctor and allied with the Daleks and a third, human villain, as self-preservation. He re-appeared in two Doctor Who Magazine comics and in the New Adventures novel No Future by Paul Cornell. Following that, he came back with a vengeance as a main antagonist in the New Eighth Doctor Adventures, played by Graeme Garden and later Rufus Hound — you can see his Big Finish-specific character tropes here. 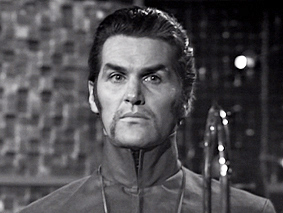 Played by: Edward Brayshaw (1969)
"Consider [mankind's] history. For a half a million years they have been systematically killing each other. Now we can turn this savagery to some purpose. We can bring peace to the galaxy, and you can help. You see, I'm not the cold-hearted villain you suppose me to be. My motives are purely peaceful."
— "The War Games"

Before the TV series introduced the Master, there was the War Chief: a renegade Time Lord with facial hair, a dark Nehru jacket, an alliance with a malevolent alien race (which he plans to betray), and powers of hypnotism, who has some type of history with the Doctor from before leaving Gallifrey.

A popular fan theory is that, due to the many similarities between the two characters, the War Chief is an earlier incarnation of the Master. Word of God, however, says that they are different characters. 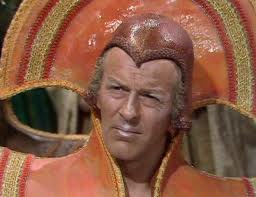 A ruthless Time Lord politician who organized the Doctor's banishment to Earth and later teamed up with the Master to seize control of Gallifrey. Same actor as the one playing a high-up Time Lord who's part of the Doctor's trial at the end of "The War Games", so it's generally assumed it's the same character both times. 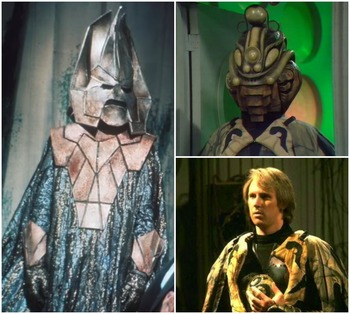 Omega was, together with Rassilon, a founder of Gallifreyan society. (The Doctor Who Expanded Universe makes him one of three or one out of six.) Believed to have been killed after being sucked into a black hole while performing an experiment to provide the Time Lords with time travel. Like with other Time Lords, this didn't stick. Instead, he wound up in an anti-matter universe, and tried to return to our own universe twice, once in "The Three Doctors", and again in "Arc of Infinity". The "bad" part is that he believes his fellow Gallifreyans forgot and abandoned him, and he is obsessed with getting revenge. The Expanded Universe has given him a few more visits, including one where he just wants to return to the anti-matter universe. He appears in the Past Doctor Adventures novel The Infinity Doctors by Lance Parkin and in the Big Finish Doctor Who audio "Omega", and has minor appearances in a few other works during Gallifrey's past. 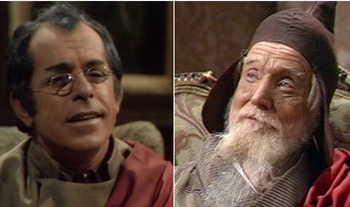 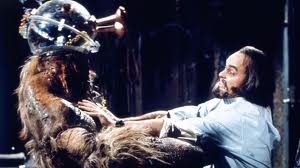 Morbius was a high-ranking Time Lord. His career was the first in millennia to dramatically alter Gallifrey's relations with the wider universe. He briefly moved Gallifrey's policy away from observation and manipulation and towards a brutal restructuring of the universe to suit Gallifrey's interests. His career ended in ignominy and destruction. He escaped a death sentence only by a secret brain transplant, subsequent to which he encountered the fourth incarnation of the Doctor. Comes back with a vengeance in Big Finish Doctor Who. 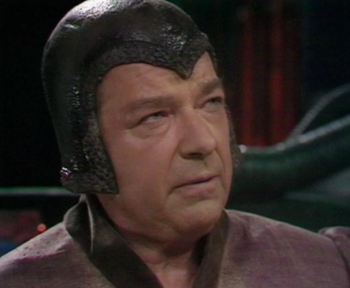 The Castellan when the Master tried to use the Eye of Harmony to restore his body. 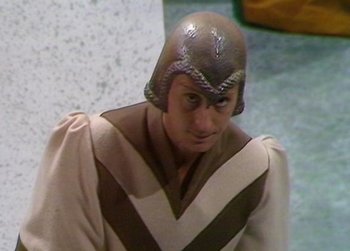 An old schoolmate of the Doctor from the Academy, who works as a commentator for the Public Video Registry. 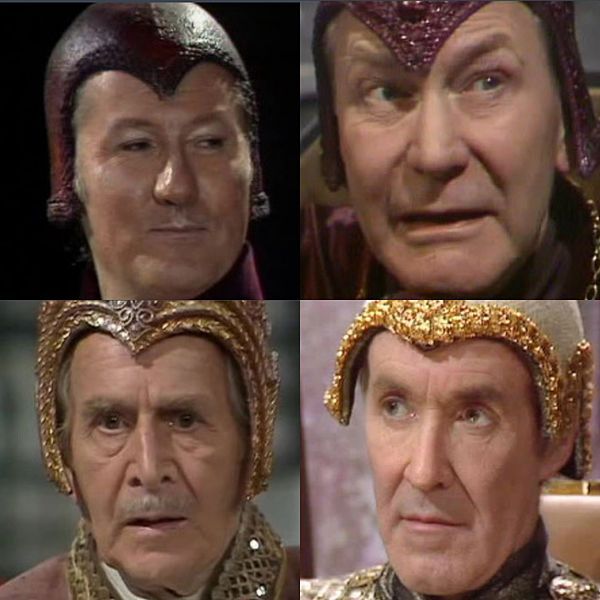 One of the Doctor's oldest friends, and a beloved mentor; originally a teacher at the Academy, he eventually retired and went into politics — Cardinal, Chancellor, and then Lord President. Borusa was a major recurring character throughout the franchise in the 1970s and 1980s. Each time with a different face. While he was obviously on the Doctor's side during his first two appearances, Borusa appeared to be a little shady during "Arc of Infinity" and turned out to be outright evil in "The Five Doctors". While he certainly survived until the end of the Time War, he didn't do much beyond his last appearance. 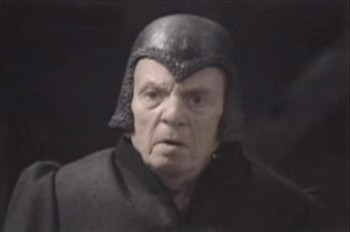 The first Keeper of the Matrix seen on the show. A bit of a pompous gent, but quite friendly.

A Chancellery Guard Commander who opposes the Vardans' (and Sontarans') invasion of Gallifrey after the Doctor seemingly aids them. He also falls in love with Leela, causing her to stay behind with him on Gallifrey. 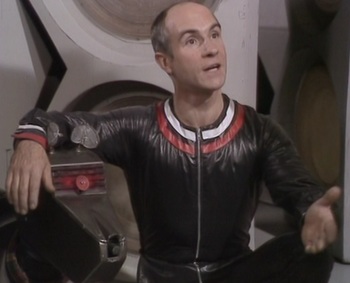 An old friend of the Doctor's from his days at the Prydonian Academy, Drax is a shifty con-man renegade Time Lord, who spent ten years in an Earth prison before he ended up captured and imprisoned on Zeos by agents of the Black Guardian.

Professor Chronotis (Fourth and Eighth Doctors) note It's all Timey-Wimey, this one. 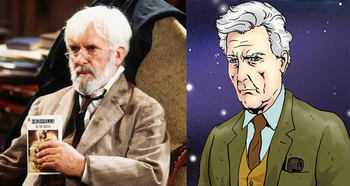 A kindly old Time Lord renegade whom the Doctor knows of old, Chronotis has disguised his TARDIS as his college living room and retired to live on Earth as a Cambridge professor. However, it turns out that he is actually Salyavin, a Time Lord criminal, who has apparently reformed and forgotten all about his past. 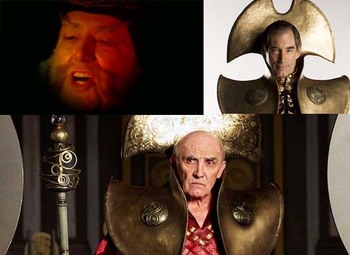 ) is named after? Yeah, this is him. Rassilon, like Omega, is one of the triumvirate who founded all of Time Lord society. As this was in the distant past, even for Time Lords, he's mostly not in the franchise, despite his name showing up everywhere in the old show and showing up at times in the revived series. He gets along rather well with the Doctor in the classic series, though he showed his Evilutionary Biologist side in Big Finish; after the Last Great Time War, the series gave him plenty of reasons to become the Doctor's enemy.

A zealous, no-nonsense Chancellery Guard Commander. Played by Colin Baker, before he became the Sixth Doctor.

The Rani (Sixth and Seventh Doctors) 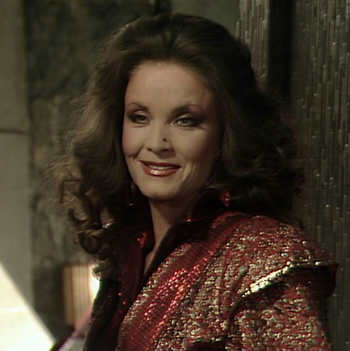 An evil Time Lady and contemporary of both the Doctor and the Master at the Academy. Would dearly love to rule her planet and experiment on various other species (including humans) in peace and quiet, but the Doctor and the Master keep getting in the way. She only appears in two serials and the "Dimensions in Time" special, but is notable for being one of the few Time Ladies shown in the classic series. 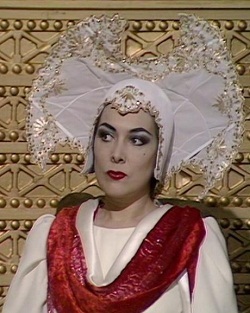 Played by: Lynda Bellingham (1986)
"Your puerile attempts at flippancy are not appreciated in this court, Doctor."

The presiding officer at the Doctor's second trial. A stern, no-nonsense Time Lady, she firmly kept order during proceedings. Given that this involved controlling both the Doctor and the Valeyard, this was no mean feat. At the end of the trial, the Doctor suggested that she stand for the vacant Presidency.

"Of those three Gallifreyans who would reshape their world, two would become great legends; the other would vanish altogether from history."
— Ben Aaronovitch, "Remembrance of the Daleks" (novelization)

The mysterious third member of the triumvirate in Gallifrey's past, who founded Time Lord Society along with Rassilon and Omega. Very little is known about him, save that he might be connected to the Doctor in some way. While barely mentioned in the show proper, he gets considerable more acknowledgment in the EU materials. 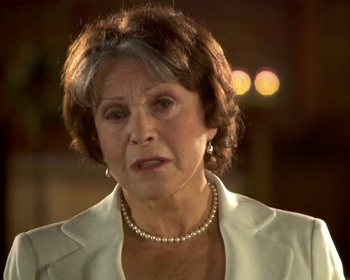 One of two Time Lords who opposed Rassilon's insane plan to save the Time Lords at the expense of reality. She appears to Wilfred Mott, in the final days of Ten's life. She and the Doctor know each other, but her identity is a mystery. 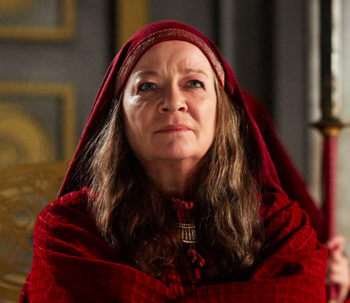 Current High Priestess of the Sisterhood of Karn, who assisted the Eighth Doctor's regeneration and apparently is entrusted with the Twelfth Doctor's confession dial (i.e. his testament). 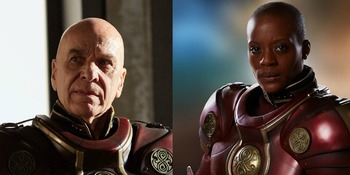 A General of the Time Lord army during and after the Last Great Time War. Normally female, she also has one male incarnation. 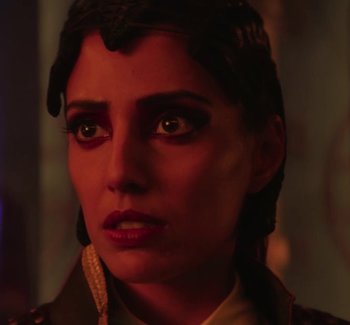 A Gallifreyan who tracks down a mysterious incarnation of the Doctor using an army of Judoon. 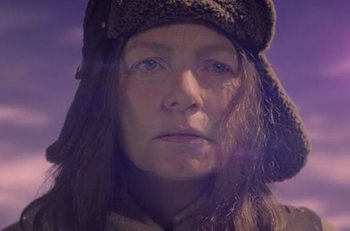 A member of the original indigenous people of Gallifrey, the Shobogans, a scientist and explorer. She found and adopted the Timeless Child, eventually exploiting their ability to regenerate to transform her people into the Time Lords.