Characters / Doctor Who  The Paternoster Gang 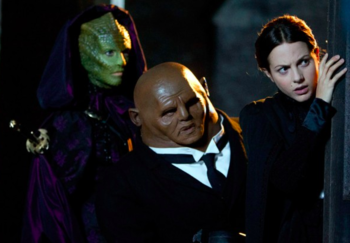 A trio of misfits in Victorian London who assist the Doctor, notably in his Eleventh and Twelfth incarnations. Since their introduction in "A Good Man Goes to War", they have become very popular, with many fans demanding a spin-off, and Big Finish naturally obliged — following Early Bird Cameos from Strax and Vastra in Jago & Litefoot and The Churchill Years respectively, the gang's first appearance together came in the form of a Poorly Disguised Pilot as part of "The Eighth of March", a special release to mark International Women's Day. The first series of their spin-off proper was released in June 2019.

Vastra is a Silurian warrior living in Victorian London as a detective with her human maidservant, lover, and eventual wife, Jenny. They were recruited by the Doctor to fight in the Battle of Demon's Run. After that, Strax came to live with them as their butler, and the Doctor spends quite a lot of time with them. Vastra apparently knows the Doctor very well from offscreen encounters. 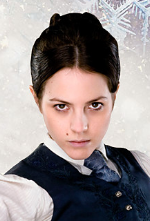 Madame Vastra's wife and Ninja Maid, who was cast out by her family for her preferences and subsequently took up a life of detective work, lock-picking and katana-wielding. 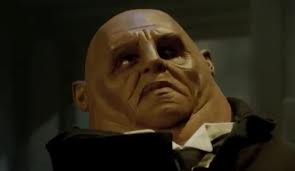 Strax was, at one time, a Commander in the Sontaran army, but was demoted to the status of nurse. At some point he encountered the Doctor and the two began an Odd Friendship, leading Strax to participate in the Battle of Demon's Run, where he was killed (or, perhaps, simply fainted). The Doctor managed to get Strax brought Back from the Dead (although he Came Back Wrong a bit), and he began living with Vastra and Jenny in Victorian London.

Showed up in Big Finish Doctor Who, where he got to team up with Jago and Litefoot... because he got hit on the head and thought they were Vastra and Jenny.