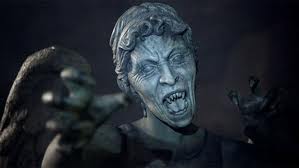 "In the sight of any living thing they literally turn to stone. And you can't kill a stone. 'Course, a stone can't kill you either, but then you turn your head away. Then you blink, and oh, yes it can!"
— Tenth Doctor, "Blink"

Quantum-locked creatures so ancient, even the Doctor doesn't know where they come from. As long as they are being observed, the Angels turn to stone. The "Weeping" in their name comes from their habit of holding their hands over their eyes so as not to accidentally see each other. As soon as they are unobserved, they move with Super Speed to overtake their prey. For nourishment, they'll transport their victims back through time and then feed on their lives spent in the past. If they're not feeling hungry, though, they'll just snap their victim's neck like a twig. One of the creepiest aliens in the history of the series.

Advertisement:
open/close all folders
In General
In Big Finish

Eldritch Abominations from the dawn of the Universe, which when observed take the form of stone statues. Scavengers of temporal energy they harvest from their victims, the Weeping Angels have fought the Doctor in several occasions.
Advertisement: 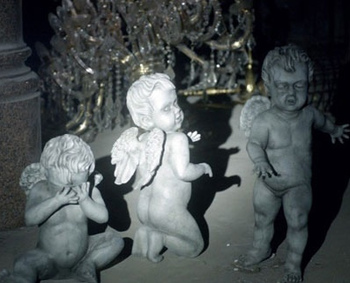 Smaller, adolescent versions of the Weeping Angels that resemble cherub statues, instead of the normal variety.
Angel Bob

Voiced by: David Atkins (2010)
An Angel who caused the Byzantium to crash to resuscitate its kin. Nicknamed "Angel Bob" by the Eleventh Doctor due to its tendency to use the voice of Cleric Bob to communicate.