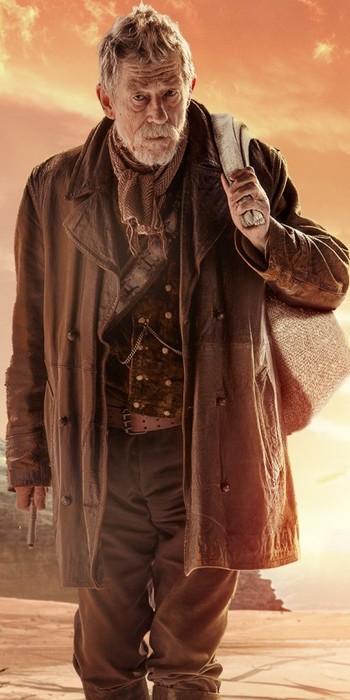 The world-weary and at times anachronistic knight — the Doctor's greatest secret. The War Doctor was a "lost" incarnation of the Doctor who existed between his Eighth and Ninth previously known incarnations. He was the incarnation who fought in the Last Great Time War, and lost his right to be called "the Doctor" for it, choosing to assume the identity of a warrior. He renounced the promises behind his name and spent an enormous period of his life in battle, doing the exact opposite of a healer's work. He evidently knew how to survive the war quite well, since he aged to the point he went from a young, fiery warrior, to an exhausted and curmudgeonly old man, complete with a scruffy beard.

His tenure is, bar none, the darkest chapter of the Doctor's entire life. On top of that, his introduction to the story was a cover-all solution to a problem writers faced that kept them from chronicling the Time War beyond a surface probing of its enormity, because no writer would dare touch the subject due to not knowing which incarnation was the one who dutifully lived out the war to the bitter end, and not wanting to risk contradicting each others' narratives. This is where the War Doctor came into play, as a surprise addition to the family.

The biggest issue stalling progress in the Time War canon was that no one outside the TV series received the final authority to confirm if it was the Eighth or Ninth Doctor or a combination of the two who participated in the Time War, only compounded with the lack of a filmed connecting regeneration sequence to sort everything out and finish the bridge from the classic era to the revival era. The general conclusion was that both of those Doctors had seen so much Character Development and behaved so enthusiastically (Eight)/reinvigorated (Nine) that writers were incapable of seeing either Doctor fit the intensely gritty and hope-starved characterization the Time War called for. Despite the Eighth Doctor's turn towards a darker character as heard in the Big Finish audios, he remained a conscientious objector until the war became unavoidable, and the only feasible outcome was that he had to abandon his whole identity to steel himself for combat and become someone else with the capacity to defy his own taboos.

Likewise, the Ninth Doctor had the inklings of a man seeking a fresh start and recoiled when faced with the loose ends of the Time War, behaving as the Doctor, though with some figments of the war combatant mentality crammed away and exposed when he was provoked. This left even the most articulate minds scratching their heads and speculating until they were blue in the face. Every time they tried to resolve things with their take of an answer, they'd end up unconvincing themselves it would work, so the issue floated unanswered in narrative limbo for an insufferably long time.

After eight years of narrative stalemate in the revival era series, the time finally was right to address the problem, with the prestigious fiftieth anniversary of the show practically begging for the Time War to be at its central focus. Unfortunately, Christopher Eccleston chose not to return, and then-showrunner Steven Moffat claimed to have a hard time believing the Eighth Doctor had been the one who ended the Time War. The Doctor's existence as we knew it had been linear, but Moffat hatched a revolutionary plan: create an incarnation played by a very famous celebrity (an honor presented to a very enthusiastic John Hurt) and incorporate them into the missing link between Doctors Eight and Nine, invalidate both as possibilities for direct involvement in the Time War, create the retcon twist of the War Doctor as the true battler of the Time War and go in with a blank slate, and Paul McGann was brought back for the regeneration. When the War Doctor was conceived, it solidified the issue at hand and opened the gates to the uncharted wilderness that is the Time War itself. However, factoring in both the War Doctor and the Metacrisis 10th Doctor from Journey's End, it meant the Doctor's regeneration cycle limit would have to be handled much sooner... fix one leak, and another one springs. Even so, this creates even more opportunities to plan creative plot twists.

While he regains his title at the end of "The Day of the Doctor", the War Doctor still doesn't count in the Doctor incarnation numbering as he was never an "incumbent" Doctor, but added retroactively. And thus the War Doctor hails from a time before the 2005 reboot, even if his story was told eight years later... and for good reason. The Doctor didn't want to bring him up.

His actor, Sir John Hurt, who became the first of the Doctors to be knighted, continued portraying the role of the War Doctor in a 12-episode line of audio stories that were clearly working toward the last act of the War Doctor's life. Sadly, he suffered a bout of recurrent pancreatic cancer that lasted for about two years and finally led to his passing right after his 77th birthday in 2017, leaving future plans for his Doctor in the air outside of printed works. Fortunately, this changed once a soundalike stepped into the role during a webcast special in 2020 called Lockdown, Jonathon Carley. He was one of many voice actors impersonating every Doctor up to Thirteen to release a short but positive story during the COVID-19 pandemic.

In 2020, Big Finish announced they'd cast Carley as a younger War Doctor, fresh off his regeneration, for a new 12-part series of audio stories, intended to explore the early stages of his role in the Time War. 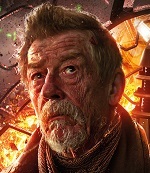 The Warrior. Expanding upon his main appearance in "The Day of the Doctor", we see him at the heart of the Time War; blunt, no nonsense, really grumpy, and ready to do what has to be done. The War Doctor insists he's not the Doctor anymore, but there are still hints of his old self that pop up occasionally. The War Doctor's story is told in a 12-part series released in four instalments separate from the monthly range.

In 2020, Big Finish announced that they were going to publish a new 12-part series with the War Doctor. This will by all appearences focus on a younger version of the War Doctor, voiced by Jonathon Carley, will tell of his early exploits following his traumatic regeneration.

Tropes associated with other comics

"Oh, yes... of course, suppose it makes sense. Wearing a bit thin... I hope the ears are a bit less conspicuous this time..."