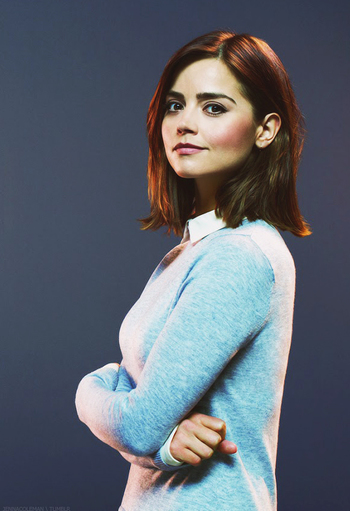 A nanny turned schoolteacher who ended up becoming a bit too much like the Doctor. First introduced as Oswin Oswald, in the series 7 premiere, "Asylum of the Daleks", as a young hacker stranded with the Daleks, then as Clara Oswin Oswald, in the 2012 Christmas Special, "The Snowmen", as a young barmaid and governess in 1892, and finally, as Clara Oswald, in "The Bells of Saint John", a young nanny of two children in the mid-2010s. The mystery of who she was and why she kept popping up in different moments of the Doctor's life was the main theme of the second half of series 7 and it defined her relationship with the Eleventh Doctor.

Series 8, in turn, has Clara dealing with the Doctor's regeneration from Eleven to Twelve (being only the second companion in the revived series to stay after a regeneration) and trying to balance out her life in the TARDIS with her job as a teacher and her new romantic relationship with colleague Danny Pink. Both of her relationships with the Doctor and Danny end up getting strained as a result of this.

In Series 9, we see Clara and the Doctor's repaired relationship strengthening, with them becoming more and more like each other. Clara gets more reckless and Doctor-like, jumping straight into danger with little care for her own safety, which culminates in the events of "Face the Raven". The pain and guilt of losing her and the need for revenge are what drives Twelve's actions in "Heaven Sent" and "Hell Bent". The loss of his best friend (and by that point, confirmed romantic parther) and her impact on his character development remain obvious for the rest of the Twelfth Doctor's run.

General
Oswin ("Asylum of the Daleks")

Colloquially referred to as Victorian Clara.