No Eye in Magic 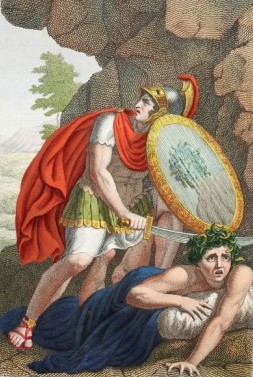 Not able to look Medusa in the eye to kill her? Grab a mirror!
"The eyes are not the windows of the soul, they are the doors. Beware what may enter there."
— The Doctor reading from a book, Doctor Who, "The Time of Angels"
Advertisement:

A quick search of this site will let you know that eyes are the windows to the soul. Well, sometimes in a Fantasy setting, these windows not only let outsiders see inside, they can also be wide open and allow power or information in or out.

Basically, certain magic requires the caster to make eye contact with the object of the spell in order to work properly.

This is because spells that produce significant effects on thoughts, individuality and/or physicality of people or objects (like Mind Control, Mind Reading or Petrification) can involve a massive amount of power that must be applied in a very controlled manner. As luck would have it, the optic nerve is pretty much a direct pathway to the brain, so these spells can be better focused and more effectively received through the eyes. This means, some magic is more powerful if you're looking directly at your target; in fact, some magic might not work at all if you're not looking at your target. This is taken to its logical extreme with Deadly Gaze and Eye Beams.

Because of this line-of-sight requirement, the object of the spell can usually avoid it by hiding behind a conveniently-available large object, covering him/herself with something, or simply not looking back at the caster. Blind characters will sometimes be immune to this, depending on the nature of the spell. Following the same idea, indirect eye contact is usually considered safe. That is, these spells generally don't work via reflection or broadcast (unless modified for that purpose), or can lessen the effects. An auditory variation might involve avoiding the effects of a Compelling Voice by listening to recordings instead of the actual source.

That's where this trope comes in, when someone successfully avoids getting hit with eye contact magic by avoiding eye contact, or when it's specifically stated a certain characteristic of the recipient can render this type of magic useless on him, regardless of how directly or intensely the caster is looking at them.