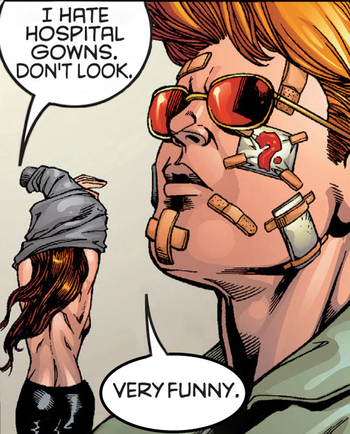 A character is hesitant to perform an action in view of another, so they request, warn, or demand for said character to turn around, not look, close their eyes, or even leave the room. This can even be done non-verbally via a Meaningful Look, a dismissive hand motion, or Body Language. It usually comes with the implication that the action won't take long, so both characters still remain within hearing distance, often even keeping the conversation going. Naturally, many characters will ignore such requests and try to sneak a peek anyway.

This is most commonly done for modesty purposes, such as a character needing to change their clothes or take a bath and needing some privacy, usually done between characters that have some Unresolved Sexual Tension. A common follow-up is for some unrelated event to occur that makes the character look or rush in, such as a sudden noise or commotion, turning them into an Accidental Pervert. A perverted character might simply ignore the request and just try to peek anyway, sometimes even resorting to tricks like Watching the Reflection Undress. May result in Pervert Revenge Mode - the peeked-upon character is angry because of it. The Tease or The Vamp will give this request playfully in a Mocking Sing-Song just to rile up their target, especially if they're going to Slip into Something More Comfortable.

This also can be done for other reasons, such as the character playing some sort of Hide and Seek game, or one character suffering from Performance Anxiety and being incapable of performing the action while being watched. This can often be an empty claim by a Con Man, and the true reason is that the action requires some sort of trickery and their request for privacy is just part of the ploy. Someone with a Shy Bladder may do this by asking someone to look away while they use the bathroom. A prisoner may take advantage of their guards allowing them privacy in order to escape.

See Blindfolded Trip when a character guides a blindfolded one towards something. See Can't Move While Being Watched for when a character or object is physically incapable of movement as long as they're being watched. See My Eyes Are Up Here for when a character draws attention to their face. See Look Behind You, when someone tricks someone else into looking away so they can escape or do something else against the other person. See Naked Freak-Out when a character is humiliated upon being seen in a state of undress. See Offscreen Reality Warp for when a reality-warping change occurs while the character has looked away.