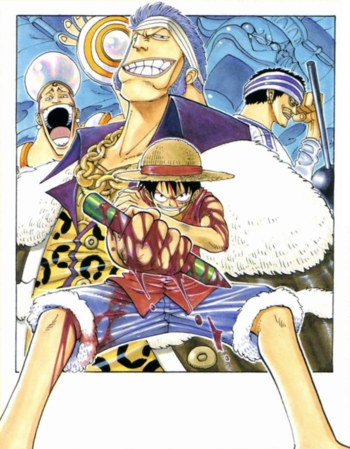 With Usopp making member four and the crew now having a official pirate ship. The next adventure begins with the crew picking up two bounty hunters who help them realize they need a cook. Luckily the duo lead the crew to the Baratie, a floating restaurant, where they meet Sanji. Getting a cook is the least of their worries however as the Baratie comes under siege by a ruthless armada captain, Don Krieg, who wants the Baratie as his own.

Click to Read
With the newly christened pirate ship, the Going Merry, in the their possession, the Straw Hats set about creating a Jolly Roger for their flag and sail thanks to Usopp's art skills. The crew then look around their new ship, with Luffy and Usopp finding a cannon. Deciding to test its capabilities, Usopp fires at a nearby rock and manages to hit it. The crew then meet in the main cabin to discuss what else they'll need for the journey ahead when the ship is suddenly attacked. Luffy confronts the assailant and manages to beat him after a scuffle. Zoro then identifies the man as Johnny, a fellow bounty hunting friend of his.

As it turns out, he and his partner, Yosaku, who is suffering from scurvy, were resting on the rock that Luffy and Usopp shot. After Nami cures Yosaku by feeding him some fruit, the crew discusses the need for a cook. The bounty hunting duo agrees to guide them to a famous ship-restaurant nearby, the Baratie, as payment for helping them out. The group soon reaches the Baratie, but as they get there, a Marine ship led by a lieutenant named Iron Fist Fullbody also arrives. After trading some words, Fullbody orders the Going Merry sunk. The Marines fire on the Straw Hats, but Luffy manages to bounce the cannonball back, only to accidentally redirect it into the Baratie, damaging part of the building. Luffy is later taken to the captain and head chef, Zeff, who demands compensation for the damage.

Meanwhile, in the dining area, Fullbody runs afoul of another person, Sanji the sous-chef of ship. After some arguing, Fullbody makes the mistake of wasting food in front of him, leading to Sanji beating him up in retaliation. The fight is stopped when Luffy and Zeff, who were also fighting, fall through the ceiling into the area. Zeff likewise beats up Sanji and throws out Fullbody. However, as Fullbody is leaving, one of his Marines comes in to tell him that their prisoner has escaped, only to then be shot by said prisoner himself, Gin. Gin walks in and demands some food, but is beaten up and thrown out by Patty, one of the chefs. As the commotion dies down, Sanji secretly serves Gin some food, saving him from death. The two men seem to strike up a friendship before Gin leaves on his own. Luffy sees this and asks Sanji to join his crew, but is rejected. However, unbeknownst to everyone, Gin is a member of the Krieg Pirates, an armada of pirates led by the fierce and ruthless Don Krieg, and has returned to Krieg to report to him about the Baratie.

A week passes, with Luffy working as a chore boy in the Baratie to pay off the damages he caused, forcing his crew to stay within the area. On one particular day, however, a huge ship sails up to the restaurant, damaged and barely able to stay afloat. Krieg enters the restaurant begging for food. The staff is hesitant to give him any even after he claims he won't hurt anyone. Sanji complies, but as soon as he's fed, Krieg attacks the cooks, claiming the Baratie now belongs to him. He demands food be prepared for his likewise starving crew. The chefs, of course, are against the idea, but Zeff, surprisingly, gives Krieg a bag of food, telling his chefs to prepare for battle. The chefs raise the battle fins around the restaurant and get ready for the onslaught of Krieg's crew.

Luffy, Zoro, and Usopp go to get the Going Merry out of the way, only to find that Nami betrayed them and stole the ship after throwing Johnny and Yosaku overboard. Furious and confused at her actions, Usopp, Zoro, Johnny and Yosaku prepare to chase after her (while Luffy plans to stay for a while longer to help the restaurant and repay his debt) when Krieg's galleon is suddenly sliced in half. Through the wreckage sails a man in black on a coffin-shaped boat. Zoro instantly recognizes him as Dracule Mihawk, the strongest swordsman in the world and one of the Seven Warlords of the Sea. It was he who slashed up Kreig's Armada, and he followed them to the Baratie from the Grand Line simply because he was bored. Just as he prepares to finish off Kreig's men, Zoro challenges him to a duel. Mihawk isn't impressed at first and fights him with a small dagger, managing to outclass Zoro's strikes. However, when Mihawk sees that Zoro is determined to continue fighting despite being injured, he decides to use his giant blade to finish their fight. Despite Zoro's efforts, he is defeated, but left alive, as Mihawk wishes to fight him again someday. As he's being bandaged up by Usopp and the bounty hunting duo, Zoro makes a promise to Luffy that he won't lose again. With that, they sail off to go after Nami. With no other credible challenge, Mihawk leaves the area as well.

Kreig's crew attacks the Baratie, and the cooks fight back, but the latter are on the losing end of the fight due to the sheer number of pirates. Sanji finally decides to step in and manages to beat a majority of them off...until Krieg's second mate, Pearl, joins the fight. Sanji manages to stay on even ground with him, but when Gin reveals he has Zeff hostage at gunpoint, Sanji is forced to stop and take a beating from Pearl. As he does, he recounts his past when he was a child apprentice cook on a ship called the Orbit. Zeff, then a notorious pirate, attacked the ship for treasure, but Sanji stood up to Zeff despite being outclassed. A tidal wave struck both the Orbit and Zeff's ship, and knocked Sanji overboard. Zeff jumped in and saved him, but both were stranded on a rock structure. Zeff gave Sanji a small bag of food he managed to grab, while apparently keeping a big one for himself (under the pretense that as an adult, his stomach is bigger), and ordered Sanji to watch for ships on the other side of the formation.

Weeks passed and eventually Sanji ran out of food. Starving, he went back to Zeff, who seemingly hadn't eaten his share yet. Sanji confronted Zeff over it with a knife and slashed open the bag, which was revealed to only have treasure inside. What's more, Zeff had cut off and eaten one of his lower legs to keep himself alive. Guilt-ridden that he nearly killed him after he had saved his life, Sanji vowed to help Zeff achieve his dream of making a floating restaurant. Luckily for them, a ship happened to pass by and they were saved. Back in the present, Gin, seeing no honor in what he's doing, defeats Pearl and claims Sanji as his own opponent. The two fight, with Gin managing to gain the upper hand due to Sanji's numerous injuries from Pearl. However, he finds he can't kill Sanji due to the latter's earlier kindness to him. Krieg becomes angered at this and uses poison gas on the area. Luffy steals gas masks for Sanji and Gin, but when he is unable to grab one himself, Gin gives his mask to Luffy and is poisoned as a result.

Angered, Luffy fights against Krieg himself. Despite Krieg pulling many a weapon out of his arsenal and having tough armor to boot, Luffy manages to power though his attacks, ultimately winning by slamming Krieg into the battle fin of the Baratie, though Krieg's last attack traps Luffy in a steel net and leaves him sinking into the water. Sanji jumps in and rescues him, at the same time thinking of his dream to find the All Blue, a section of ocean where all fish from all over the world are said to be found. Krieg subconsciously gets to his feet, thinking he's still fighting, until a recovered Gin knocks him out, accepting their loss. Krieg's crew are forced to take a small boat and sail off, with Gin promising he'll meet Luffy and Sanji in the Grand Line.

Luffy awakens and is told of his victory, which clears him of the debt to Zeff. He talks with Sanji, who explains his dream of finding the All Blue, but feels he can't leave the Baratie until he's repaid Zeff. Zeff overhears this, and tries to have his cooks tell Sanji that the latter's cooking is terrible so he'll leave. Sanji doesn't buy it, but nonetheless appreciates the gesture and agrees to join Luffy's crew. Just as he does, Yosaku comes back, riding in the mouth of a panda shark, to tell Luffy that Nami is headed to a dangerous island. Sanji packs his belongings and takes one final walk around the Baratie before heading out, giving a tearful goodbye to his mentor and fellow chefs. With that, Luffy, Sanji, and Yosaku take a boat and head off to go catch up with the others.
Baratie Arc has the following tropes