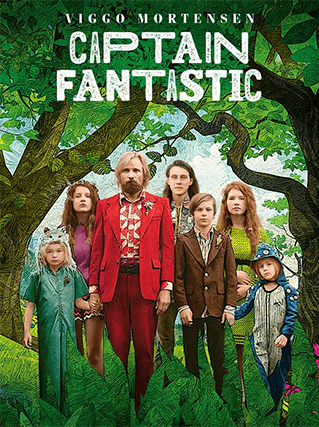 Captain Fantastic is a 2016 movie, directed by Matt Ross with Viggo Mortensen and Frank Langella.

Ben Cash lives with his six children in the wilderness of Washington State, preserving their lifestyle In Harmony with Nature, mostly away from society. However, the family has been thrown into turmoil by the hospitalization of Ben's wife Leslie with bipolar disorder, and early in the film she commits suicide.

While trying to cope with this trauma, Ben and the family decide it is time for them to travel to her funeral and meet their extended family in New Mexico, including Leslie's disapproving father Jack (Langella), confronting urban society as they go. Along the way cracks start to show as the children begin to come of age in this strange new environment, forcing Ben to confront his decisions and their future head-on.