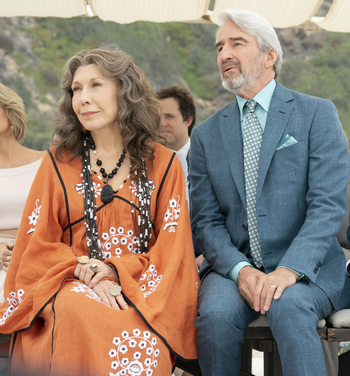 "A bohemian-looking girl with dreadlocks floated past in a long paisley dress, but a five-thousand-pound handbag revealed that her hippy credentials were as fake as Tempest's disability."
— Robert Galbraith, Career of Evil
Advertisement:

The Bourgeois Bohemian is what the Hipster or Granola Girl often turns into when they hit middle age, or what the New-Age Retro Hippie might have become had they not dropped out.

The defining trait of the Bourgeois Bohemian (Bobo for short) is that, while they belong to the upper or upper-middle class in socioeconomic terms, their values are often inherited from the New Left and countercultural movements of the 1960s. Expect very open attitudes towards issues such as religion, sexuality, and recreational drugs, as well as support for liberal or progressive political causes. A fondness for state-owned/funded media — e.g. NPR (National Public Radio, USA), PBS (Public Broadcasting System, USA), CBC (Canadian Broadcasting Corporation), The BBC (British Broadcasting Corporation), and The ABC (Australian Broadcasting Corporation) — is also common, as is a tendency to shop at places like the USA's "organic" Whole Foods Market chain.

Unsympathetic examples of the trope will often be portrayed as being hypocritical about their wealth, criticizing other wealthy elites while sharing much of their lifestyle. Sympathetic portrayals will usually suggest that progressive principles and wealth aren't incompatible, and may, in fact, invoke such ideals as the "Gospel of wealth" or noblesse oblige as a justification for it.

The trope originated as an insulting depiction in the 1890s, and among Socialists rather than the nationalists, with Populists in the United States and Labourites in Britain using it to mock their more bourgeois liberal/socialist counterparts. These people have also been called "champagne socialists" in the U.K., "gauche caviar" in France, and "limousine liberals" or "latte liberals" in the U.S. Anti-liberal and anti-socialist nationalists and conservatives began to co-opt it in the mid-20th century. The term itself, however, comes from the 2000 book Bobos in Paradise by the conservative New York Times columnist David Brooks. Brooks identified Bourgeois Bohemians — "bobos" for short — as Baby Boomers like himself who had grown up with the individualistic, do-it-yourself ethos of the 1960s counterculture, but now found themselves in The '90s as well-off, middle-aged professionals.

Often someone's Hippie Parents, and often Self-Made Man and Nouveau Riche, having earned their comfortable living after a poor and rebellious youth. Compare with Yuppie, which is what a Bourgeois Bohemian would have been during The '80s had they been more materialistic, class conscious, and obsessed with Simple, yet Opulent Conspicuous Consumption.

See also: The Man Is Sticking It to the Man, Rich Kid Turned Social Activist, Rule-Abiding Rebel, Fox News Liberal, and Upper-Class Twit. If the aging character becomes conservative rather than retains their counterculture values, they're a Former Teen Rebel. Bourgeois Bumpkin is almost this trope, but with the political ideology flipped and combined with It's All About Me. Cool People Rebel Against Authority may motivate young Hipster Bobos.

This has nothing to do with the upper-middle-class citizens of a region in the Czech Republic.

The Princess means well, but she's just too spoiled to really comprehend anything.

The Princess means well, but she's just too spoiled to really comprehend anything.