Film / The Decline of the American Empire 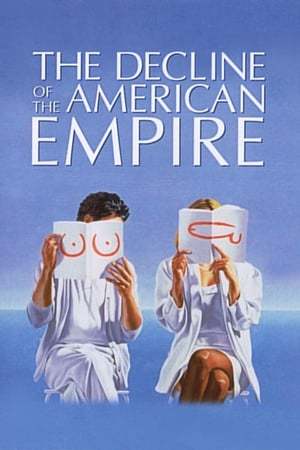 The Decline of the American Empire (Le Déclin de l'empire américain) is a 1986 film from Canada—namely Quebec, so in French—directed by Denys Arcand and produced by the National Film Board of Canada.

A bunch of (mostly) middle-aged (mostly) university professors get together for a weekend. Remy and Louise are the hosts. Their guests include: middle-aged professor Pierre and his lover, Danielle, a history major half his age; Diane, a divorced history professor who also works for CBC radio; Claude, an art history professor and the only gay person in their social circle; Dominique, who has written a book about how the "American empire" is in terminal decline; and Alain, a younger man who is studying for his doctorate.

The men hang out at the house and prepare dinner while the women go out to the gym. Their talk is exclusively about sex, sex, and sex. Remy, an incorrigible womanizer, wishes that he could have four wives and says that sex with his wife is better after he cheats on her. Louise isn't aware of the enormous scale of her husband's infidelties but does know that he cheats on her sometimes—and then there was the time they went to an orgy. Claude claims that there is nothing more beautiful that the hindquarters of a 12-year-old boy. Diane tells a story about how she once had sex with an Italian dude on the beach. Guileless Alain mostly goggles at his libertine elders. As the evening wears on, events make clear that, despite how much the aging hippies mock conventional morality, they are not as content with their lives as they seem.

The first Canadian film to be nominated for the Oscar for Best Foreign Language Film. Followed by a sequel, The Barbarian Invasions.