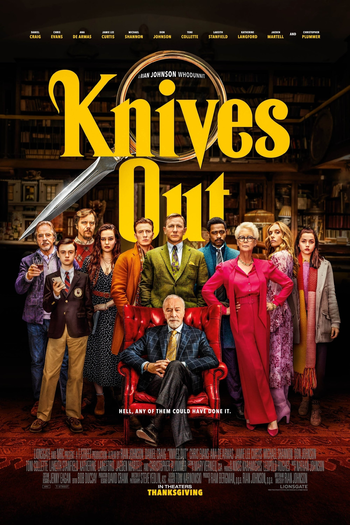 "I have eliminated no suspects." note From left to right: Richard, Jacob, Walt, Meg, Ransom, Benoit Blanc, Harlan (in chair), Detective Elliott, Linda, Joni, and Marta.
"That fateful night seems at first glance to fill that hole perfectly. A doughnut hole in the doughnut's hole. But we must look a little closer. And when we do, we see that the doughnut hole has a hole in its center - it is not a doughnut hole at all but a smaller doughnut with its own hole, and our doughnut is not whole at all!"
— Benoit Blanc
Advertisement:

Knives Out is a 2019 murder mystery comedy thriller directed and written by Rian Johnson.

Harlan Thrombey (Christopher Plummer), a bestselling mystery author and patriarch of the wealthy Thrombey family, dies on his birthday by what looks like suicide. In the aftermath, three detectives - Lt. Elliot (Lakeith Stanfield), Trooper Wagner (Noah Segan), and renowned Gentleman Detective Benoit Blanc (Daniel Craig) – come to investigate the scene. But this will not be such a simple investigation – Harlan altered his will recently, and the Thrombeys are a Big, Screwed-Up Family with multiple motives between them...

The film premiered at the Toronto International Film Festival on September 7, 2019, and its wide release in North America followed on November 27. Shortly thereafter, Netflix acquired the rights to produce two sequels, with the first one due to release in 2022. The confirmed cast for the sequel, Glass Onion (subtitled A Knives Out Mystery) includes Dave Bautista, Edward Norton, Janelle Monáe, Kathryn Hahn, Leslie Odom Jr., Jessica Henwick, Madelyn Cline, and Ethan Hawke.

Like most of Johnson's prior movies, the director's commentary

was released while the film was still in theaters. Start it when the Lionsgate logo appears to listen along.

Tropers beware! Many of the trope names themselves are spoilers, so if you want to avoid them it's highly recommended you watch the film first.

Knives Out contains examples of:

open/close all folders
A to H
I to P
Q to Z
"A twisted web, and we are not finished untangling it. Not yet."